Joseph Giulietti in 2015 when he was president of the Metropolitan Transit Authority (with Michael Vitiello, an MTA employee).

State Department of Transportation Commissioner Joseph Giulietti is about to finish his first year on the job and his plate is more than full. It’s overflowing with controversy. 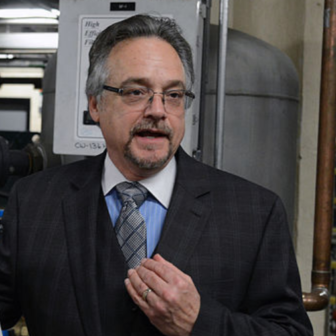 Joseph Giulietti in 2015, when he was president of the Metropolitan Transit Authority.

Last week, in part one of an exclusive, no-holds-barred interview, he spoke of his challenges in speeding up Metro-North, coping with the overbudget, behind-schedule Walk Bridge replacement and ordering new rail cars.

This week, in part two of our conversation, he speaks of the biggest issue of all: Getting the Legislature to pass truck tolls to raise money to replenish the Special Transportation Fund, which pays for transportation in our state.

I asked the commissioner if Gov. Ned Lamont had “bungled” this initiative by his constant flip-flopping on what to toll and where.

Choosing his words very carefully, he said, “The governor has admitted that there were some things he wished had been done differently. If it was bungled, it was because he was trying to come up with bipartisan support for a solution everyone could buy into.”

Giulietti said nobody expected how pervasive and organized the opposition forces would be against tolling.

As for Patrick Sasser, leader of the #NoTollsCT movement, “I’ve never met him. This is never a personal issue.”

But when the initial tolling plan was unveiled, he said the #NoTollsCT forces “ran with the paranoia.” But if not tolls, “how do you want to pay for it (transportation)? Connecticut drivers have been subsidizing out-of-state drivers for years. Tolls are the closest thing we have to a user fee.”

As for the claim that truck tolls will lead to car tolls and the money will be misspent, “The federal government determines that, and that those funds must be spent on the roads (where the tolls would be).” Trucks don’t buy gas in Connecticut, so they’re getting a free ride.

On the claim that the state DOT wastes money: “We used to have 5,000 people at the CDOT. Now we have 2,700,” Giulietti said. Even snowplowing is done with one driver, guided by a computer on where to deploy brine and how to best clear the snow. One truck can now even handle three lanes of pavement.

“We’ve always looked how we can be more efficient. That’s the type of department CDOT has become. We always want to be good stewards of the public’s money.”

“I don’t know of a better way (to pay for transportation) than tolls. The governor has always said, ‘If you have a better idea, come to me with it,’ so if we’re not going to do tolling what’s the alternative? … Gas tax, income tax, sales tax? But there don’t seem to be any alternate ideas on how to get this thing (funding) through.”

Giulietti said he has a good working relation with Lamont. “I’m not a politician, I don’t run for office,” he said. “But I know of very honorable people who do the right thing (like voting in favor of tolls) despite the threats of being voted out of their jobs.”

“I’ve worked now for six or seven governors. Lamont is one of the most honest and decent people I’ve worked with … a genuine good guy who truly wants bipartisan support to try and get this thing through. It makes it easy (for me) to face the criticism because I know he’s trying to do the right thing.”

To which I can only add — amen!