Darien’s town government will enter negotiations to buy the 60-acre shoreline estate on Long Neck Point peninsula, one of the largest pieces of private land in lower Fairfield County, the Board of Selectmen unanimously decided Monday night.

The Great Island estate, owned for more than a century by the Ziegler family and now the Steinkraus family, went on sale in 2016, with an asking price of $175 million, now reduced to $100 million.

The Board of Selectmen, after meeting in executive session for about an hour, authorized First Selectman Monica McNally to enter into negotiations for the property. McNally said the board has discussed the value of the land and potential uses the town might have for it.

Aerial views of the property, from the Douglas Elliman website

McNally described the tract as “the last and best property of its kind that is available on the East Coast of the United States.” She said there will “never be another opportunity” for the town to buy a similar tract of land within Darien’s borders. She added, “The availability of this type of land is scarce.” 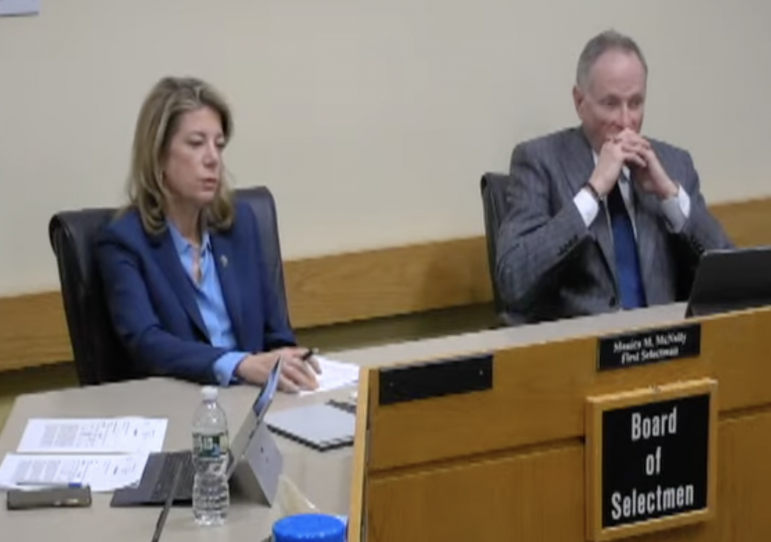 McNally also said she believes that even 200 years from now, “when people look on this property, they will look favorably on this transaction,” assuming the town government and the owners reach a sales agreement.

If McNally reaches an agreement to buy the property, she said, then three town boards will need to approve of the purchase: the Board of Selectmen, the Board of Finance and the Representative Town Meeting.

McNally said the town is interested in buying “a portion” of the property, but she also said the “portion is more than 60 acres.” The Douglas Elliman real estate company website is describing the size of the property as 60 acres, although when the estate first went on the market, it was described as 63 acres.

According to the Douglas Elliman website, the estate has “over a mile of pristine shoreline” on the Sound. The property includes horse stables and a 13,000-square-foot “manor house” built around 1905. Other buildings in the compound include a “guest house, caretakers cottage, 19th century farmhouse, and a charming seaside cottage.” A dock on the property can accommodate a 100-foot yacht.