Darien Library is hosting a virtual tour of natural and man-made wonders in New York in the first of an eight-week online series. Each event will be accessed on Zoom.

Week 1, Oct 5 — From the Seven Wonders to National Parks 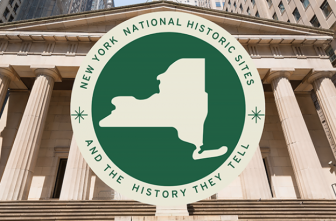 Even in ancient times, there were those who loved to travel to see great natural places as well as man-made ones. The growth of the middle class in the 19th century and the advances in transportation technology made our present age of easy travel possible. These changes were the leading factors in the creation of America’s National Parks system.

Register for From the Seven Wonders to National Parks

This event will take place on Zoom. You will receive an email confirming your registration with a link to join the Webinar after you register for the event.

Each event in the series takes place from 3 to 4 p.m. on successive Tuesdays.

Despres shares the story of Federal Hall, New York City’s first City Hall as well as the first Capital of the United States under the Constitution. It also celebrated the Inauguration of George Washington. Later on, it was a Custom House, as well as a U.S Sub-Treasury location.

Despres discusses the African Burial Ground and slavery in New York from the 17th Century through the 18th Century. Learn how New York City became the second largest slave holding city in North America, second only to Charleston.

He won the great trust of George Washington and went on to become the first Secretary of the Treasury. His economic plans addressing the national debt set the New Republic on a secure economic foundation.

Alongside James Madison, he was the major contributor to the Federalist Papers, the classical work about checks and balances in government and how federalism should work.

[Darienite.com editor’s note: Hamilton also had the distinction of having Ethan Allen Brown as a law clerk. Brown (named after the Revolutionary War hero Ethan Allen) was born on July 4, 1776 in Middlesex Parish, which later became Darien. Brown later became the governor of Ohio and a U.S. senator.]

In 1823 it became Castle Garden, a restaurant and entertainment center, where Opera singer Jenny Lind, the “Swedish Nightingale,” made her American debut. It was an Immigration Station from 1852-1890 and New York Aquarium from 1890-1940. Allen will shed light on the 20th Century fight for preservation of historic structures.

From 1892 to 1922 over 12 million immigrants were processed on Ellis Island. Despres will explain how the process was accomplished and share how many immigrants were sent back.

Despres will also explain what the criteria was for refusing entry. Was this process successful and did it serve its purpose fairly?

Register for Ellis Island and Immigration

The Statue of Liberty was a gift from the people of France to the People of the United States. Presenter, Allen J. Despres will explore the 20-year process from far-fetched idea to successful beacon of Democracy and Immigration to the New World. Despres will share how the poem “The New World Colossus” by Emma Lazarus was chosen. Learn how the Statue of Liberty became the great icon it is today and is recognized the world over.

Register for Statue of Liberty

Despres shares the story of Grant’s Tomb, the largest mausoleum in the United States. The burial place of the General who was called in his time the ‘the savior of the Union’ who defeated the Confederacy and became the most important Civil Rights President between Lincoln and Lyndon Johnson.

Now considered a very important President indeed, whose desire to “Let Us Have Peace” was sincere but who also fought for the rights of the newly freed African Americans as the Reconstruction President.

[Darienite.com editor’s note: Late in life, Grant was bankrupted by Ferdinand Ward, a man who was a business partner of one of Grant’s sons as he swindled numerous investors. Grant visited Ward in Ward’s country house in Stamford at least once. Ward’s house is gone, but the gate house has survived. It’s located at the corner of Strawberry Hill and Holbrook Drive. Grant’s bankruptcy led him to write his memoirs, which became renowned as the best autobiography written by any U.S. president. This Stamford Advocate article mentions a plaque at that site, which states, incorrectly, that Grant began writing his memoirs there. He didn’t.]

Allen J. Despres is a retired United States park ranger. Allen has been giving programs for the American and even the international public, about the important issues of universal and American values of history found in our National Parks and Historic Sights for over twenty years.

As an interpreter of history at Weir Farm, the Statue of Liberty and Ellis Island, the African Burial Ground, Grant’s Tomb, Federal Hall, and Castle Clinton, Allen has lectured, given tours, and created programs for the general public as well as school groups.