Tom Kaminski is like an omniscient guardian angel, floating in the heavens and keeping motorists in the tri-state area safe from motoring mayhem.

For 34 years Kaminski has been a traffic reporter for WCBS 880 radio, heading a team of producers, spotters and tipsters covering traffic and transit from his vantage point 1,500 feet above the city in the station’s Bell 206 helicopter.

Most of the time he’s in the chopper, but always with a pilot and, more recently, a camera operator for his twice hourly updates for PIX-11 TV. Six times each hour (“on the 8s”) from 5:30 to 9 a.m and again from 4:30 to 7 p.m. his live weekday traffic reports on WCBS-AM 880 help steer thousands of travelers on their way to and from work. 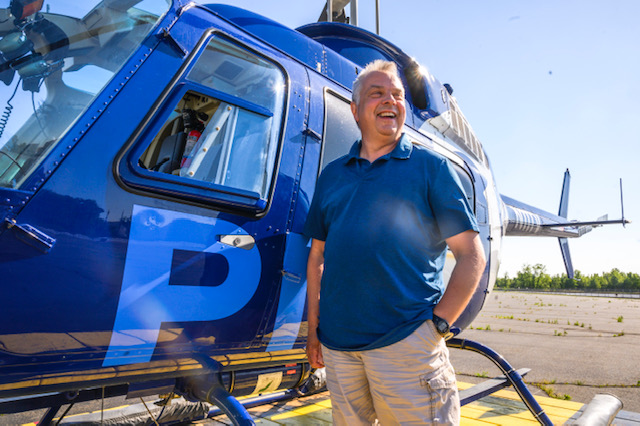 Tom Kaminski and the PIX 11 helicopter

“The rush hour never really ends in Connecticut,” he tells me. So even when he’s not flying, the station is still staffed with traffic reporters. “Fairfield County is a huge audience for us,” said WCBS News Director Tim Scheld.

Midday construction on Interstae 95 or the Merritt Parkway can turn even off-peak travel into gridlock, so WCBS’s traffic reports are must-listening whenever I’m on the road. And for rail commuters, Kaminski and crew have a direct line to Metro-North checking on Twitter tips about transit delays.

“I want our listeners to think ‘This guy has my back,’ so I’m always on call should conditions warrant special reports,” says the 59-year-old traffic veteran, one of the last live traffic reporters in and on the air.

Kaminski’s typical day starts by waking at 3:30 a.m. He checks in with the station’s traffic producer by 4:30 and is airborne from Linden airport in New Jersey in time for his first live report at 5:30 a.m.

“Then we head to where conditions are the worst,” he says. Often, he hears from loyal listeners who call in tips (212-975-8888) in addition to the ground team back at the station monitoring police scanners, live traffic cams, Google Maps and Waze.

Kaminski doesn’t see new traffic apps as competition. “You look at Waze and see an icon where delays begin. But you can’t tell if it’s a stalled car or an overturned truck, so I’m their eyes in the sky painting the word pictures.”

By 7 a.m. the chopper has to land to refuel, but the traffic reports continue. When weather conditions are bad — low ceiling, gusty winds, poor visibility — Kaminski works from his base station either at the airport or his tech-equipped home. Despite decades of flying in all sorts of weather conditions he claims “I’ve never been airsick.”

Working a split shift, Kaminski is off from mid-morning until early afternoon. “I always try to catch a nap,” he says, before diving into his p.m. drive-time duties.

Since COVID-19 forever changed our commuting habits, he’s noticed a major change in traffic. “Fewer people are taking the train, opting instead for the perceived safety of driving, despite the traffic. But the increase in speeding accidents has led to some horrendous accidents: really violent stuff”, he says.

“The worst accidents seem to be when the traffic is lightest and people are driving way too fast,” he laments. His best advice for motorists is his signature sign-off line after his last report in the morning.

“Still on the road? Easy does it!”