Tickets are now on sale for Cocktails & Comedy, a fundraiser for The Undies Project, which takes place virtually on Thursday, Nov. 4.

— an announcement from The Undies Project

Laugh for a cause from 7:30 to 9 p.m., from the comfort of your own home, with comics Kelly MacFarland and Buddy Fitzpatrick.

MacFarland has appeared on the Today Show, Comedy Central, NBC’s Last Comic Standing and Comics Come Home 25 at the Boston TD Garden. She can be heard on SiriusXM radio.

Fitzpatrick recently co-stared, co-wrote and co-produced the film “A Wrestling Christmas Miracle” on Amazon, and the web series “QCComedy Club.” He has numerous television credits and can be seen opening for Joy Behar and was a frequent opener for Joan Rivers. 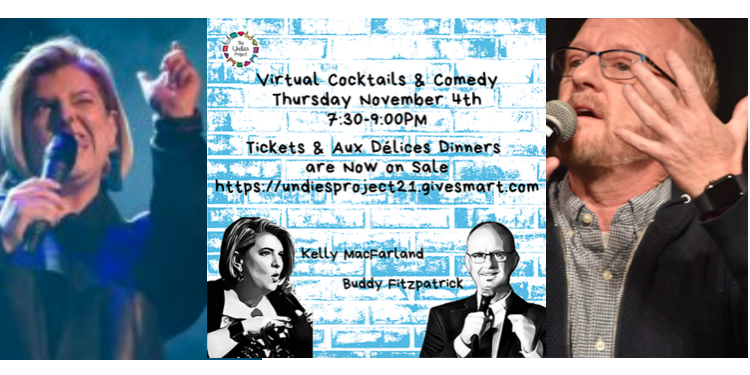 Tickets are on sale now.

Aux Délices has put together some delicious meals, available for purchase to enjoy on the evening. They are generously donating 40% of proceeds to The Undies Project.

Tickets are $45 per household. Tickets and meals are now on sale, online, here.

The silent auction for this 6th annual Cocktails & Comedy fundraiser will go live at the end of October, with something for everyone. There will be a live giving opportunity during the event.

The money raised will be used to help The Undies Project continue to fulfill its mission to provide new underwear to men, women and children in need to improve their lives.

The Undies Project is a unique nonprofit organization that supports more than 27 organizations that serve those who are homeless, living in shelters or who are on a low income.

For many, underwear is a necessity, not a luxury. Since the formation of The Undies Project the organization has distributed over 340,200 undergarments.