Dick Morrill, a long-time resident of Darien and Southbury, passed away on Aug. 13. He was 99. 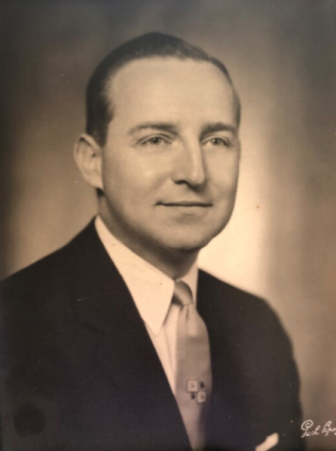 He will be lovingly remembered for his quick wit, his infectious laugh, his encyclopedic knowledge on almost any subject, his unique aptitude for enlightening conversation, and his rich appreciation of humanity.

Dick was born in Grand Rapids, Michigan on July 8, 1922 and graduated from Williams College, Class of ‘45. During World War II, he served as an ambulance driver with the American Field Service in the Burma campaign. After the war Dick remained active with the AFS, including, in 1948, serving as chaperone for the initial international exchange students in the U.S. That program now has over 275,000 alumni.

Dick began his career in 1949 as a reporter with the Wall Street Journal in New York and in Dallas, where he met his future wife, Jane Polk Ball.

He went on to a career in the nascent field of investor relations at Olin Mathieson, Indian Head Milla, Bangor Punta, Lone Star Industries, Carl Byoir & Associates, the Omega Group, and Morrill Associates. Dick was proud to have been one of the initial founders and a 51-year member of NIRI, the National Investor Relations Institute.

In retirement, Dick’s interests were diverse. He traveled abroad regularly and was a welcome and expected presence at all family gatherings. He took great pleasure in researching and writing on history — particularly family history. Just this summer he completed a monograph on Admiral Richard H. Jackson, commander in chief, Battle Fleet during the 1920s.

Dick was a member of the vestry at Saint Luke’s Episcopal Church in Darien and the Church of the Epiphany in Southbury. He enjoyed his memberships in the Burma Star Association, the Society of the Cincinnati, the Nutmeg Curling Club, and the Tokeneke Club.

The joy of Dick’s life was his family. He was predeceased by his wife, Jane; his sisters, Julia Ramage and Joan Patterson; and his daughter, Susan Wommack (Clay). He is survived by his daughters, Marian (William Fisher) and Judy (Randy Taylor); and six cherished grandchildren: Carter, Jane, Abigail, Robert, William, and Jonathan.

A memorial service was held in Southbury. A celebration of life and interment will be held at 11 a.m., Saturday, Oct. 16 at Saint Luke’s Episcopal Church in Darien.

In lieu of flowers, donations may be made to the Church of the Epiphany in Southbury, Saint Luke’s Episcopal Church in Darien, or the American Field Service.

— an obituary from Munson-Lovetere Funeral Home, where online condolences may be left