Darien students Lila Debano, Mei Gallagher and Jack Pegler were honored last week as finalists at the 14th eesmarts Student Contest ceremony held at the State Capitol for their entries in the seventh-grade category.

— an announcement from Energize Connecticut 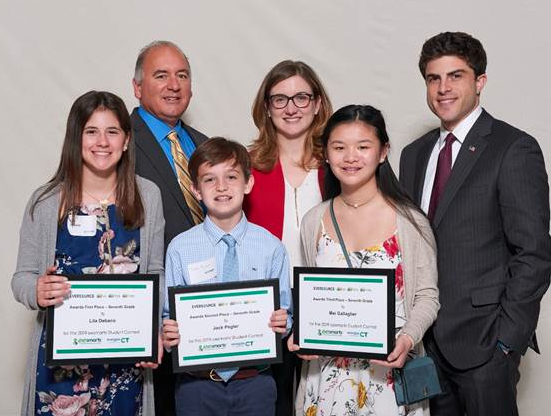 Jack was awarded 2nd place for his Dr. Seuss-inspired poem “An Ode to H2O.” His poem served as a reminder about the importance of conserving and protecting water. Jack explained that an increase in water usage has the potential to cause significant issues for everyone in the future.

Mei received 3rd place for her poem about global warming. Her poem was a call-to-action to reduce pollution, protect the planet and save wildlife.

The ceremony attracted more than 150 students, parents, teachers, elected officials, and clean energy supporters from across the state in celebration of the students’ hard work. Connecticut Department of Energy and Environmental Protection Deputy Commissioner Mary Sotos was the keynote speaker, and Miss Connecticut 2018 Bridget Oei served as Master of Ceremonies.

There’s more information on the student contest and the eesmarts program online.

Energize Connecticut helps you save money and use clean energy. It is an initiative of the Energy Efficiency Fund, the Connecticut Green Bank, the State, and your local electric and gas utilities, with funding from a charge on customer energy bills. Information on energy-saving programs can be found at EnergizeCT.com or by calling 1.877.WISE.USE.