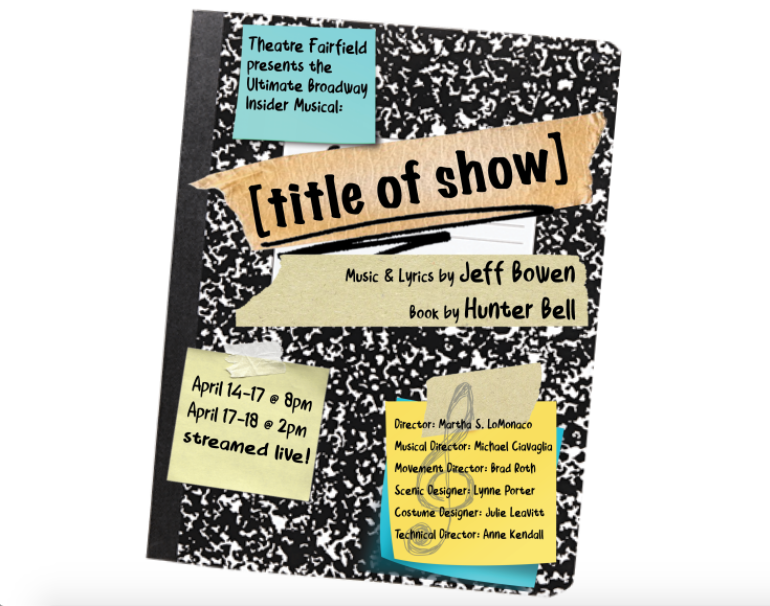 During the pandemic, theater performances have joined nearly everything else in going livestream online, and Fairfield University’s performance of the musical “[title of show]” takes advantage of the difference rather than just showing you a taped stage performance.

So expect it to be different.

Two guys answered an ad for a theatre festival looking for new work. With only three weeks to write the piece, they engaged two women friends to help out. Where the application asked for “[title of show],” they left it as it was, brackets and all.

“[title of show]” tells of the creative journey of four talented singer-actor-writers — from off-off Broadway to Broadway — in 90 minutes. It celebrates their friendship and creative process in all its fun, frustrations, and glory.

Embracing the Differences of Online Vs. On Stage

“[title of show]” is groundbreaking for Theatre Fairfield, as it will be delving into the realm of film and television due to the extraordinary amount of camera work necessary for this production.

The final product, while live, will also showcase the work of Video Engineer Park Lytle ’21 as he edits and arranges performers digitally to create an innovative virtual experience.

This video, one in Theatre Fairfield’s weekly series, “Part of it All – Behind the Scenes with ‘[title of show].’” gives a taste of how the livestream experience can be different from the one on stage:

More About ‘[title of show]’

The production is being rehearsed and will be performed live and in-person with a virtual audience. Actors will sing, dance, and act unmasked in their “pods” — Covid-safe, plastic-walled structures the company created — allowing actors to safely create live theatre while in the same space.

“'[title of show]’ is filled with optimism, creativity, adventure, and camaraderie. Creative people coming together to make theatre happen, despite all odds, and who just keep going, no matter what obstacles are thrown in their path,” said Martha LoMonaco, director of the show and also of the theatre program.

“It’s perfect for NOW, when we need to say ‘YES!’ to moving forward together boldly, with artistry and with love.”

Here’s another video from the “Part of it All” series:

If You’ll Be Seeing It …

Tickets are now on sale at the Quick Center Box Office: $10 general admission, $5 for all students. Call the Box Office at (203) 254-4010 or buy tickets online at QuickCenter.com.

After purchasing a ticket, patrons will receive a YouTube link via email on the day of the scheduled performance. Theatre Fairfield will have tech support on-call to assist virtual audience members as needed.

Who Else Is Involved

The musical’s book is by Hunter Bell and music and lyrics by Jeff Bowen.