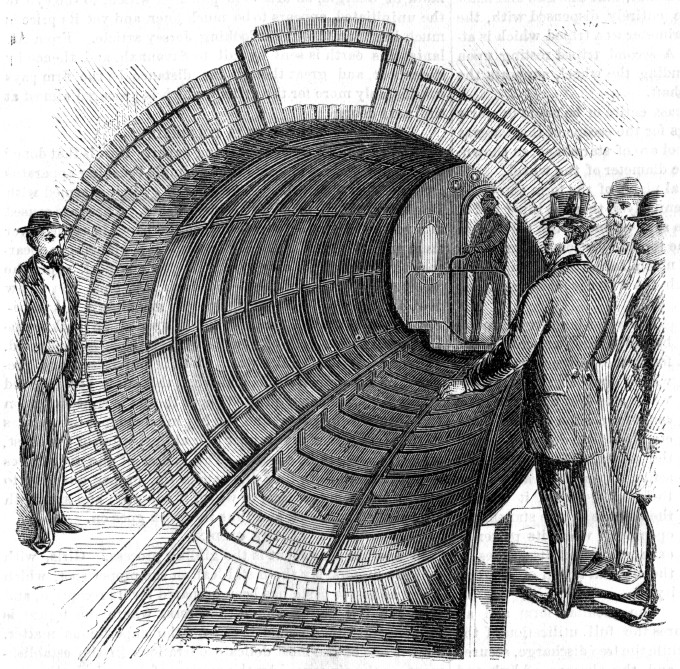 Tunnel entrance of the Beach Pneumatic Railway as seen from one of the two stations. The keystone actually spelled the words PNEUMATIC / 1870 / TRANSIT. The car with the conductor outside is just approaching. From Scientific American, March 5, 1870. (Originally in Frank Leslie's Illustrated Newspaper, February 19, 1870.) [via Wikimedia Commons]

A secret project, defying the government, helped build America’s first subway. It only ran for three years but carried hundreds of thousands of passengers, even though it only spanned 312 feet. And it was powered by air.

In the 1860s, New York City was in a transportation crisis. The streets were jammed with horse-pulled trolleys and wagons, as many as 1,000 an hour passing a single point on lower Broadway. Pedestrians dodged the vehicles and mounds of horse manure.

By 1863, London solved a similar road chaos by opening the world’s first subway, The Underground. But New York’s Tammany Hall wasn’t interested as Boss Tweed [who eventually had a home in Greenwich — editor] was making massive amounts of money from investments and kickbacks from the city’s street railroads.

But Tweed was interested in another London innovation: Mail transported underground in pneumatic tubes. Seizing the moment, American inventor and Scientific American editor Alfred Beach obtained a city permit to construct a postal tube system on lower Broadway. Using $350,000 of his own money ($6.4 million in 2018 dollars), Beach’s plan was far grander and his “tube” would be far larger.

Tunnel entrance of the Beach Pneumatic Railway as seen from one of the two stations. The keystone actually spelled the words PNEUMATIC / 1870 / TRANSIT. The car with the conductor outside is just approaching. From Scientific American, March 5, 1870. (Originally in Frank Leslie’s Illustrated Newspaper, February 19, 1870.) [via Wikimedia Commons]

Working secretly at night in the sub-basement of Devlin’s Clothing Store near City Hall, Beach started digging his tunnel. In 58 days, it was complete, running one city block. All he needed was a “car” and a means of propulsion.

Given that his tube was only eight feet in diameter, Beach opted for a small, round passenger car that could carry 22 people. The interior was posh and upholstered. And to lure riders fearful of subterranean lairs, he built a $70,000 station complete with chandeliers, plush chairs, a goldfish pond and a piano player.

It Blew Them Away (It Also Sucked)

To power the train, he acquired a 50-ton ventilation fan used in mining, nicknamed the Western Tornado. Sucking air from the streets above, the huge fan would blow the car down the track at 6 mph. When the car reached the end of the tunnel, the fan was reversed, sucking it back into the station.

On March 1, 1870, the subway opened to the public. For 25 cents a ride ($4.50 in today’s money), thousands came to see transportation’s future. Beach donated all of the fare revenue to charity.

“The Pneumatic Passenger Railway, as Erected at the American Institute, Fourteenth Street, New-York, 1867.”

Tweed was enraged, especially when Beach predicted he could transport up to 20,000 passengers a day five miles north to Central Park at speeds up to “a mile a minute.” The Boss had other plans.

He wanted to solve the street congestion by building up, not under. Of course, his plan for elevated railroads would make him a fortune. Coupled with the financial collapse in the Panic of 1873, Beach’s Pneumatic Transit system was doomed. The fans were shut off and the project was shuttered.

Beach’s tunnel was later used as a shooting gallery and wine vault before being sealed for good in 1874. In 1912, workers digging the BMT Broadway Line dug into the old tunnel and found the car and old piano. Beach’s pneumatic mail system did survive serving customers until 1953.