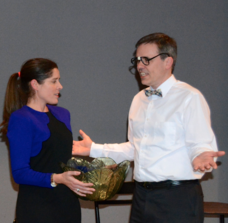 The Nerd, a two-act comedy written by American playwright Larry Shue opens on Friday, Nov. 6 at the Darien Arts Center, which is celebrating its 40th anniversary in 2015.

This top grossing American play is based on the hilarious dilemma of Willum Cubbert, an unassuming young architect visited by a man he’s never met, but who saved his life while unconscious in Vietnam.

The visitor turns out to be an incredibly inept, hopelessly stupid “nerd” who outstays his welcome with a vengeance. The DAC Stage production, filled with laughter and silliness, promises to deliver all kinds of humor to audiences.

Tansy McGinnis, played by Darien resident Nova Hall, has an attraction to Willum, but is determined to move to Washington D.C. to to pursue a career as a TV meteorologist. David Ryan plays Axel Hammond, a smart aleck drama critic and mutual friend to both Willum and Tansy. 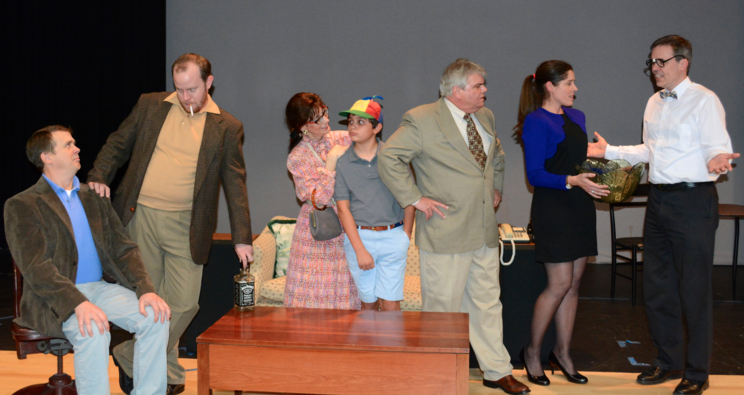 All are present when Rick Steadman, the “nerd” arrives as the unexpected houseguest at a dinner party for Willum’s client, Warnock Waldgrave. Rick’s awkward manner and inappropriate behavior throw the occasion into a shambles. Darien’s twelve-year-old Jake Smith plays Thor, the obnoxious child of the Waldgraves.

Norris Wakefield plays Willum, while longtime DAC Stage actress Deborah Burke joins the cast as Clelia, Thor’s mom, with Scott Faubel as his dad, Warnock. Roger Dykeman plays the tactless, insensitive and aggravating nerd and is among notable actors who have been cast in this role, including acclaimed British comedian Rowan Atkinson.

The Nerd was the top grossing American play in London’s West End in 1986 and ran on Broadway in 1987 for 441 performances, starring Mark Hamill and directed by Charles Nelson Reilly.

Bob Johnson, teacher, drama advisor, and director at Westhill High School in Stamford, directs the DAC Stage production and commented, “The chemistry among this cast is just incredible; we are all in stitches already at rehearsals. The show will surely give our audiences a good laugh.”

Darien resident Autumn Howard and Anthony Tedesco co-produce the DAC play, which is family friendly for ages 8 and up.