February, 2019 has been proclaimed “Teen Dating Violence Awareness and Prevention Month” by Darien First Selectman Jayme J. Stevenson, who urged Darien residents to work together to eliminate dating violence from our community.

— an announcement from Respect Works

“Teens especially high school age do not realize that most of the times they are in relationship problems [is] due to them being unaware what mental abuse can do to them,” said Emma Cavoli, co-president of Respect Works, a group of high school students trying to educate the public and their peers about violence in teen relationships. 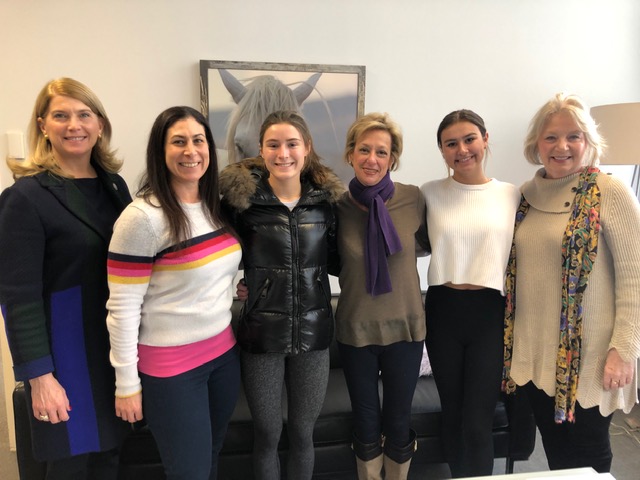 Made up of both males and females, Respect Works meets monthly at the Depot Youth Center. The Darien Domestic Abuse Council mentors the group. Both groups believe the more people, including teenagers, that they can educate about domestic abuse, more will come forward.

“Respect Works is very passionate about healthy relationships and promoting an end to teen dating violence,” said Katie Elders, co-president of the group.

One in three adolescents in the United States is a victim of physical, sexual, emotional or verbal abuse from a dating partner; and only 33 percent of teens who are in an abusive relationship ever tell anyone about it, Respect Works said in a news release.

Here’s the text of the proclamation (minus all but the first of the “whereas” words, replaced by dash marks), which is dated Feb. 1 and has more information about teen dating violence: 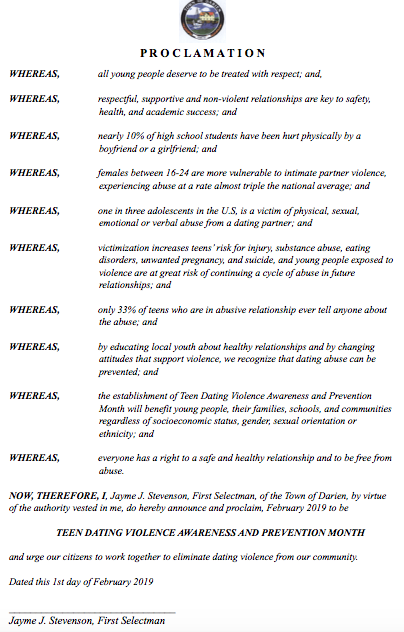 Whereas, all young people deserve to be treated with respect; and

—Respectful supportive and non-violent relationships are key to safety, health an academic success; and

—Nearly 10 percent of high school students have been hurt physically by a boyfriend or a girlfriend; and

—Females between 16 [and] 24 are more vulnerable to intimate partner violence, experiencing abuse at a rate almost triple the national average; and

—One in three adolescents in the U.S. is a victim of physical, sexual, emotional or verbal abuse from a dating partner; and

—Victimization increases teens’ risk for injury, substance abuse, eating disorders, unwanted pregnancy and suicide, and young people exposed to violence are at great risk of continuing a cycle of abuse in future relationships; and

—Only 33 percent of teens who are in abusive relationship[s] ever tell anyone about the abuse; and

—By educating local youth about healthy relationships and by changing attitudes that support violence, we recognize that dating abuse can be prevented; and

—The establishment of Teen Dating Violence Awareness and Prevention Month will benefit young people, their families, schools and communities, regardless of socioeconomic status, gender, sexual orientation or ethnicity; and

—Everyone has a right to a safe and healthy relationship and to be free from abuse.

Now, therefore, I Jayme Stevenson, first selectman of the town of Darien, by virtue of the authority vested in me, do hereby announce and proclaim February 2019 to be

and urge our citizens to work together to eliminate dating violence from our community.