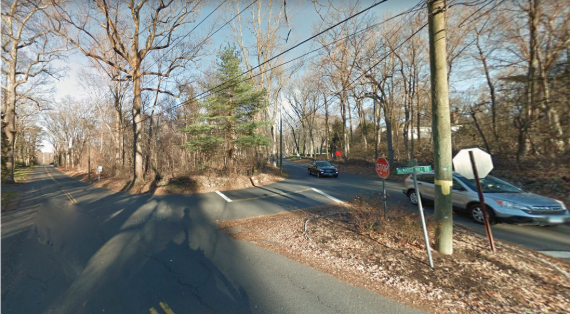 Parcel A" of the former Ruth Lapham Lloyd estate is located below the Merritt Parkway, at Talmadge Hill and Lapham Roads. Streetview

Talmadge Hill Community Church, which sits just south of Darien’s border with New Canaan, might move across the street into the other town if New Canaan town government decides to sell a parcel there, according to the New Canaan first selectman.

— This article is adapted from reports here and here originally published by New Canaanite.com.

Saying revenues would go toward the renovation of Waveny House, New Canaan’s highest elected official said he’s discussed the possible  sale of a disused and disconnected portion of the former of Lapham estate for residential development.

The approximately 6.25 acres located below the Merritt Parkway and on the west side of Lapham Road could be sold for as much as $2 million for two residential building lots, according to First Selectman Kevin Moynihan.

The property known as “Parcel A” is one of several parcels that New Canaan acquired from Ruth Lapham Lloyd in 1967 and is the only one whose deed allows it to be sold, Moynihan told NewCanaanite.com.

The idea of selling the property has been discussed quietly for years, and could become a formal proposal as the Board of Finance has “talked about disposing of assets,” Moynihan said during an interview last week.

Parcel A\” of the former Ruth Lapham Lloyd estate is located below the Merritt Parkway, at Talmadge Hill and Lapham Roads. Streetview

“The money would be put into the renovation of Waveny House, so it would be respectful of the fact that it was part of Waveny,” Moynihan said. “But the town gets no use out of that property.”

Lapham Lloyd in 1962 had gifted New Canaan six acres “downhill” from the parcel in question to build the upper levels of the Talmadge Hill Parking Lot, Moynihan said. In 1966, she donated 46 acres to the town for the “new” high school, and then 20 more, and in 1967 the town made its major acquisition of nearly 300 acres that encompasses what most know as Waveny Park. That acquisition was made with a series of deeds that divided up the property into several parcels, including the one in question.

The actor Christopher Lloyd lived at Waveny House and moved to Stamford in his teens when the property was donated to New Canaan:

The property does not currently benefit New Canaan, Moynihan said, and he’s discussed the idea of selling it for years with the leadership of the finance board.

The only type of sale that Darien residents living on the south side of Talmadge Hill Road would stand for is to convert the parcel into two building lots, Moynihan said. (Under the Darien Zoning Regulations, the Talmadge Hill properties that front Parcel A are in the “R-2” or residential two-acre zone.)

A committee currently is studying ADA requirements and preparing to make recommendations about how best to make accessibility upgrades to Waveny House including an elevator, accessible routes and toilet facilities.