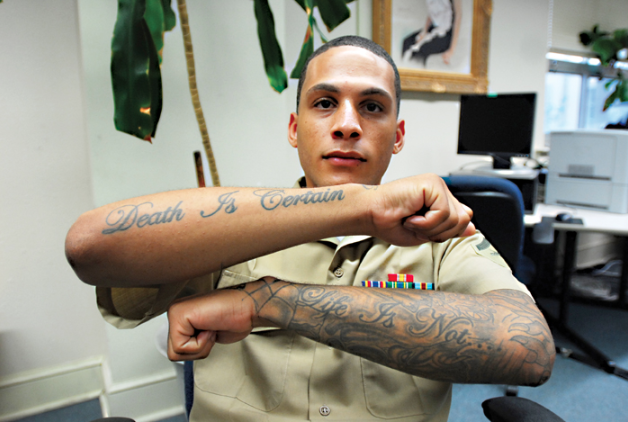 U.S. Army photo by Kristin Molinaro for The Bayonet

Darien Police Department is one of the few in southwest Connecticut that still forbids police officers from showing their tattoos when they’re on the job.

Police Chief Donald Anderson has now been authorized by the Police Commission to draw up a “general order” allowing tattoos for the department to present to a future meeting of the commission. 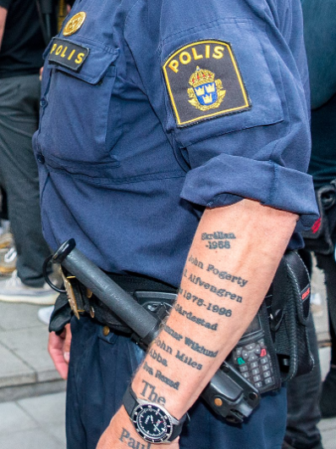 A trial period of six months to a year would be prudent, Anderson said, and the chief would have veto power over whether any particular tattoo could be shown when an officer is on the job, he said. He said an officer would be told if the tattoo was rejected for visibility “based on content.”

Members of the police union spoke to the commission members at its previous meeting and asked for the change.

“Our current policy is that visible tattoos must be covered at times work,” Anderson said. “So, effectively, the officers who have tattoos on their arms, they either wear long sleeves during the summer or they wear some kind of covering sleeve.

“Officers have said that they’ve gotten questions [from people] asking them if they’ve gotten burned when they’re wearing these sleeves that are either flesh-colored or black,” he continued.

The tattoo issue comes up time and time again,” Anderson said. “In the 36 years that I’ve been here, it’s been discussed for 30 of those 36 years.”

U.S. Army photo by Kristin Molinaro for The Bayonet

U.S. Marine Corps Lance Cpl. Robert Patterson, of the Fort Benning Marine Detachment (and not a Darien police officer), shows off tattoos he received in 2007.

Commission Chairman Kim Huffard noted that in this area only Monroe and Ridgefield police departments have a tattoo policy similar to Darien’s.

Anderson said that before drafting a regulation, he will look to see what regulations are in place elsewhere, to see what they involve and whether there’s been a problem with any aspect of them.