A record-breaking number of six Darien students were among the 54 winners of the Connecticut Realtors Foundation’s Gates Memorial Scholarships this year.

— an announcement from the Darien Board of Realtors 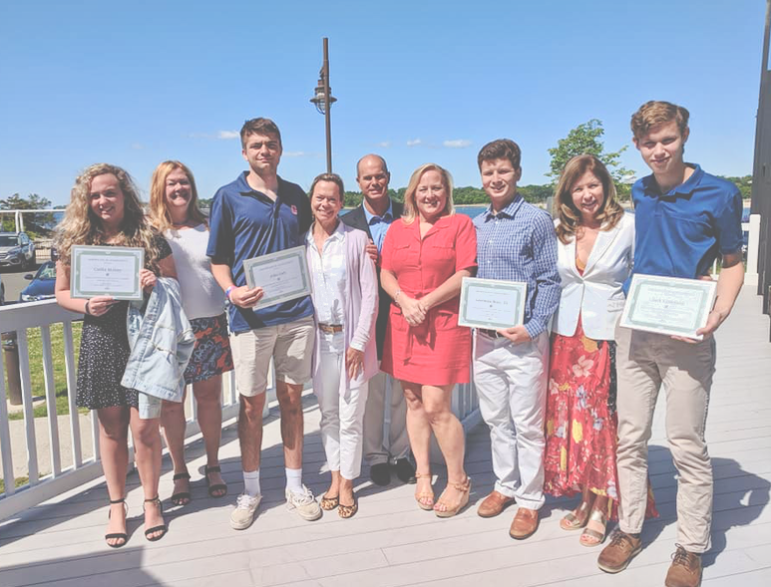 Photo from Darien Board of Realtors

For the 2018-2019 academic year, the Connecticut Realtors Foundation received 113 eligible applications. This year, children of Connecticut realtors were selected to receive a total of $45,000 in scholarships from the Raymond F. Gates, Jr. Memorial Scholarship Fund.

Erica Blaze graduated from Darien High School last year. She is currently attending Penn State University pursuing her Bachelor’s in Civil Enineering with a minor in Environmental Engineering and a certificate in Humanitarian Engineering/Social Entrepreneurship.

Hoping to someday work as a Civil and Environmental Engineer, she would like to go into engineering design specifically focused in developing countries.

Erica is a member of the Society of Women Engineers, Engineers Without Borders, Atlas Thom Organization and She’s The First, organizing fundraising events to promote global education for girls. Erica is the daughter of Realtor Ana Blaze with Houlihan Lawrence, Darien.

John Gatt graduates from Brien McMahon High School in June. He will attend Santa Clara University in the fall as a Finance major with a minor in real estate.

He would like to start out as a stock analyst and ultimately start his own hedge fund. John was on the high honor roll throughout high school, is a National Honors Society member and a Columbia Book Award Recipient.

He is on the Peer Mediation (Executive Committee), is class secretary, Unified Sports co-president, BKind Club board member and a School Wellness Committee member. John is the son of Realtor Meghan Gatt with William Raveis Real Estate, Darien.

Jack Littlefield will graduate from Fairfield College Preparatory School in June. Scoring an impressive 1560 on his SATs, he will attend Rensselaer Polytechnic Institute in the fall to pursue a Bachelors degree majoring in Mathematics and a Computer Science Minor.

Jack enjoys many extracurricular activities at school, but is most involved with and dedicated to running, campus ministry and STEM.

He completes for the school math team and has enjoyed participating in the Appalachian service trip to help the poor by building houses, painting, power washing and assisting on a farm for a week. Jack is the son of Realtors Sara Littlefield with Coldwell Banker, Darien.

Caitlin Mobley graduated from Darien High School in 2015 and is currently enrolled as a psychology major pursuing her bachelor’s degree at the University of Connecticut.

Having to medically withdraw from college during her first year has inspired Caitlin to want to move forward into a direct entry nurse practitioner program. She was inducted into the Tua Sigma Honors Society and the National Society of Collegiate Scholars but has most enjoyed her experience working with children with special needs, including tutoring and being an employee with the College Steps program and at Norwalk Community College where she attends classes with and assists students with disabilities.

Caitlin is the daughter of Patricia Whitehead, a realtor with Coldwell Banker, Darien.

Morgan Tienken is a 2016 graduate of Darien High School who is attending Colgate University in pursuit of a bachelor’s degree in chemistry and economics. She is a chemistry lab assistant/peer tutor, plays for the Colgate women’s club soccer team and volunteers as a greeter for Colgate’s admissions office.

Last fall, Morgan spent a semester abroad in Dublin, where she was exposed to and adapted to a new system of teaching at the University of Dublin. Morgan is the daughter of Realtor Janine Tienken with Houlihan Lawrence, Darien.

Lawrence Story III is a 2019 graduate of Darien High School. He will attend The Citadel Military College of South Carolina in the fall as a Business Major with a Minor in History.

Lawrence is considering doing some ROTC to pay for his education and will possibly use that experience to work for the FBI. He has been on the Darien football team for all four years of high school and was also on the rugby team for three years.

He is a certified lifeguard who works at the Wee Burn Beach Club and has also enjoyed volunteering at Person to Person. He is the son of Realtor Lawrence Story Jr., with Halstead Darien.

Lawrence Story III has been selected to receive this year’s tribute scholarship in memory of his grandfather, Larry Story, 1996 CTR past president from the New Canaan Board of Realtors.

Lawrence Story III’s grandmother, Lucille D. Story with Halstead, Darien, is a past president of the Darien Board of Realtors and was awarded 2017 Realtors of the Year by her peers at the Darien board.

About the Gates Memorial Scholarship Fund

Gates was the executive vice president of the Connecticut Realtors. Over the past 43 years, children of Connecticut realtors have been awarded scholarships totaling more than $966,000.