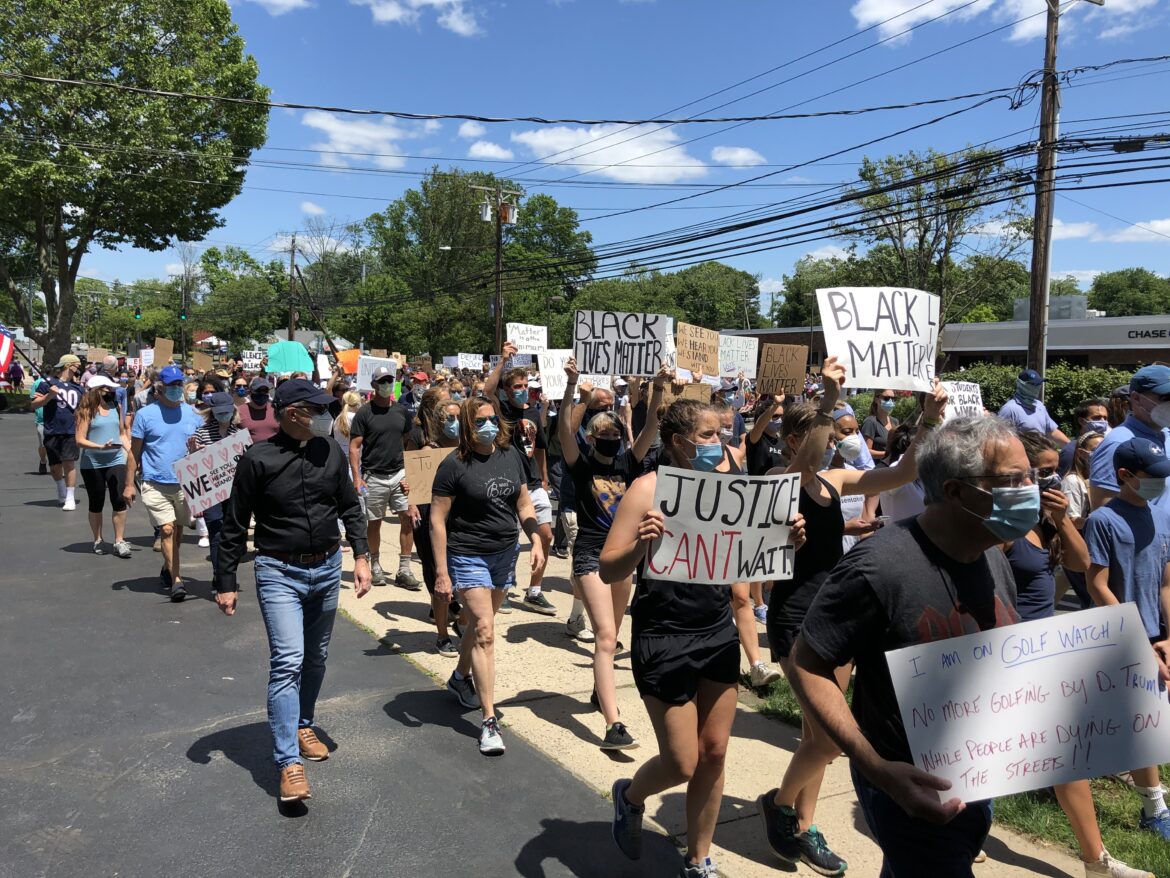 After a brief rally in the Trader Joe’s parking lot on Sunday afternoon, several hundred people decrying racism and police brutality in recent deaths marched to Darien Police Headquarters in a peaceful demonstration.

“How many more lives have to be lost in order for change to go into effect?” one of the organizers, Max Johns, told the crowd of 300 to 400. He was shaking as he spoke. 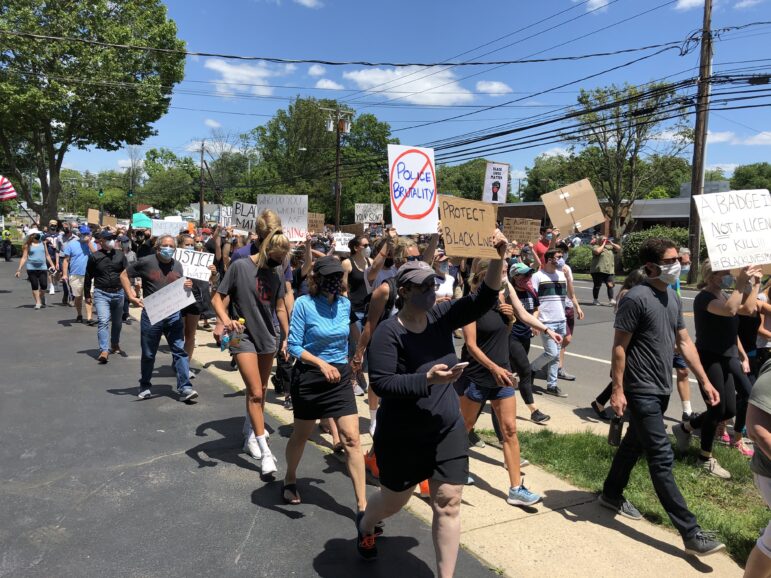 The marchers as they started off from Trader Joe’s on the righthand side of the Post Road. Police stood by and blocked traffic along the way, including Interstate 95 exit ramps at the Exit 11 interchange.

“How many more times must we wake up and see people of color marginalized, beaten, arrested and killed? What is it going to have to take for our country to validate basic human rights?”

Johns’ emotional appeal to rights and racial harmony was repeated in various ways and on related topics by the other speakers, some of whom were from the crowd, invited to speak at the end of the event in front of Darien Police Headquarters.

“We should focus on the similarities and the differences [between various groups], mostly,” one of the speakers said. 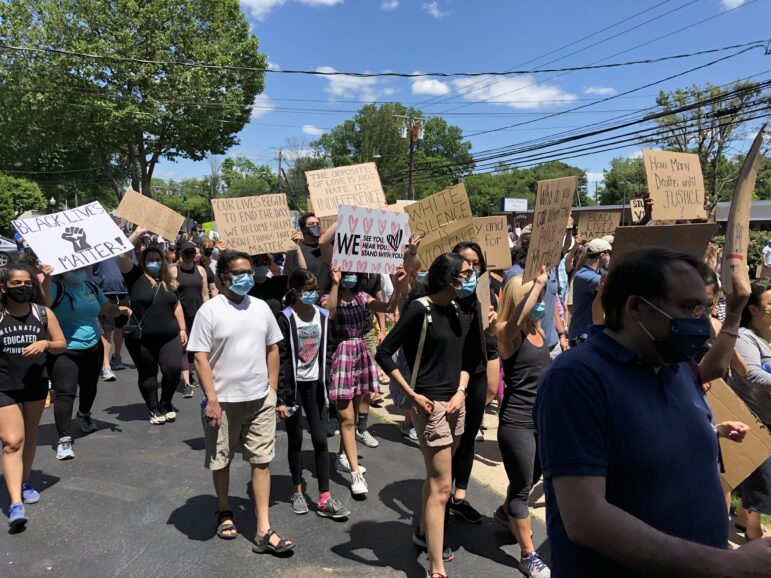 More of the marchers

The speakers included one who sang and another who read a long poem. Speakers often talked about their own lives. Darien Police Chief Donald Anderson also spoke to the crowd.

Every face appeared to have a mask on at the event (as organizers had urged), but social distancing was largely ignored. The crowd was overwhelmingly young and white, with dozens of families participating with young children. The racial backgrounds of the speakers was more varied. 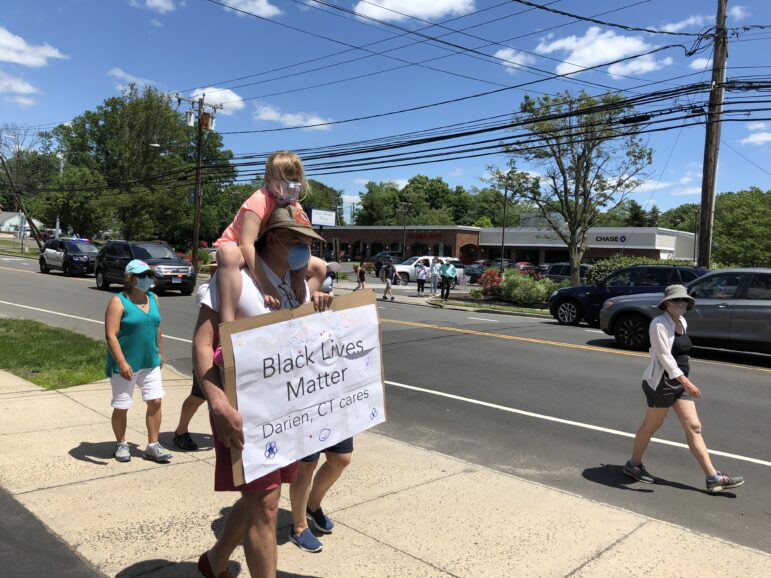 Young marcher (or, rather, rider)

A police officer said the crowd seemed even bigger than the one last week organized by local members of the clergy.

Near the start of the event, many in the crowd kneeled on one knee in a “moment” of silence that lasted the eight or so minutes that video showed the Minneapolis police officer with his knee on George Floyd’s neck as Floyd died.

People came with hand-made signs and seemed to know the call and response chants, like “Say his name! / George Floyd! / Say her name! / Breonna Taylor!” 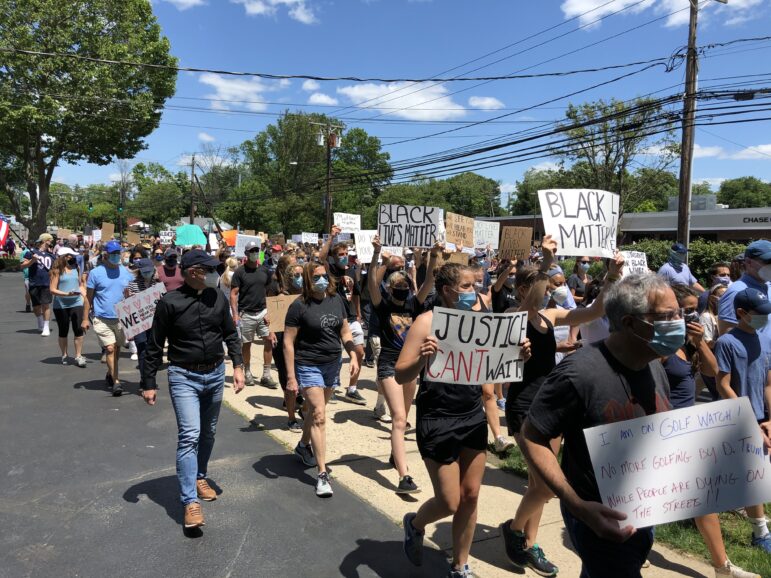 The well-known chant, “No Justice, No Peace” was angrily shouted by the marchers as they walked down the Post Road, but none of them seemed to be in the mood to disrupt the peace. The only hate expressed was against racism and brutality.

“Remember, this is a peaceful protest,” one of the organizers told the crowd just before it started to march. “We want to spread awareness. You can chant, you can march, you can yell, but please remember we don’t want to strain the message, and please be safe.” 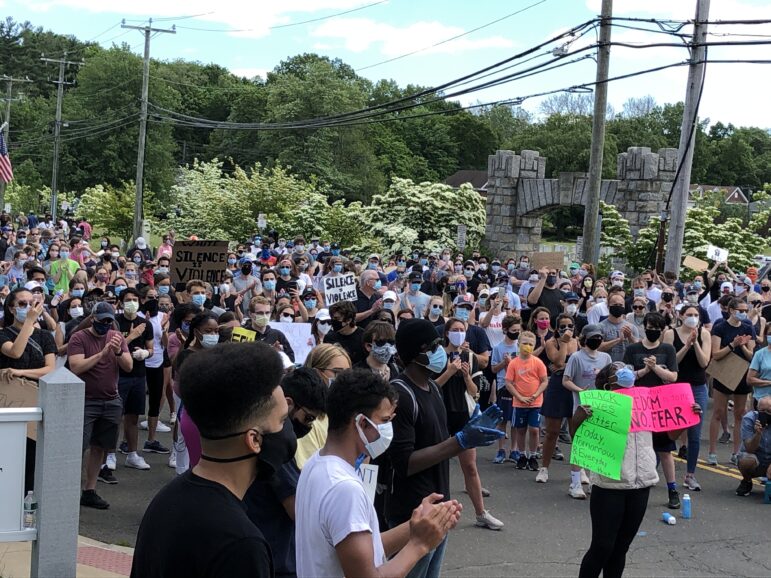 Part of the crowd on Hecker Avenue near Darien Police Headquarters.

“No matter what your faith, your creed, your color, I claim Mark 12:31: You should love your neighbors as yourselves. […] You can find my email address, you can find my phone number. I do not hid behind any type of blue wall. I will have a conversation, reasonably, professionally and effectively, any day that ends with a ‘y’ and just about any hour of the clock. […]

“Thank you for keeping this peaceable. That is what we are looking for when you come to Darien.”

One speaker from the crowd, who gave her name as “Allie,” said she’s 30 now and from Brooklyn now but grew up in Darien.

“And I think we need to [unclear word — “teach”?] everybody on how to be anti-racist, not just not racist. That means, as a white person — this is mostly a white town — looking at yourself and thinking, ‘How have I benefited from my privilege that we have,?’ Because this racism is rooted in our society, deeply, deeply rooted, and it’s going to take a bit of work and a lot of talk for that to change.” 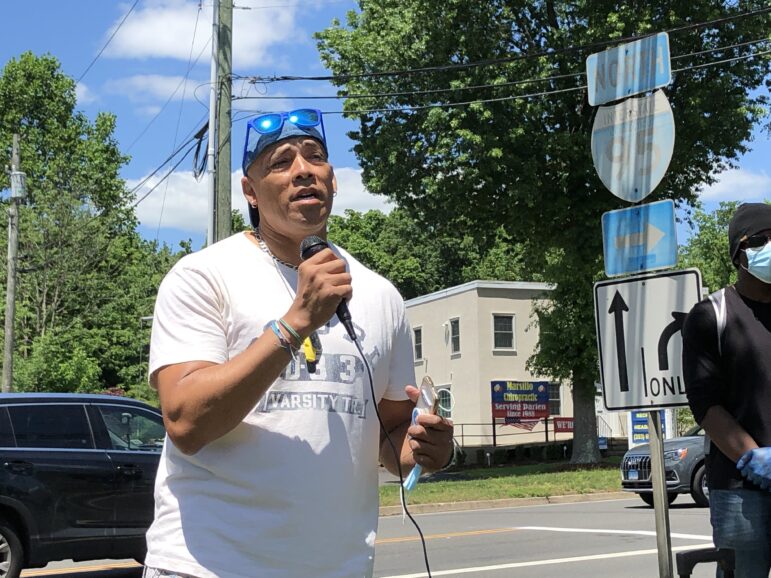 PJ spoke at the beginning rally in the Trader Joe\’s parking lot.

“We need change. I need my children to grow up in a world where change is possible,” he continued. “And change will take place […] This is a battle of good and evil and racism. This is a system, whatever you want to label it. But outside the labels, we have got to get to human kindness. We have got to get to loving one another. God created us all in his image.”

Some speakers urged the crowd to do more than participate in a march, and they gave suggestions: 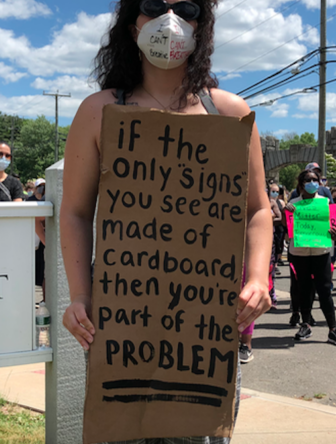 “Please go home, look up information, sign petitions, donate if you can. Spread the word. Don’t be scared to post on your Instagrams, on your social media platforms. Your voice makes a difference, and in a time like this, it especially makes a difference,” one speaker said.

Allie, the speaker from Brooklyn, said: “I know that there’s some money in this town, so I’m looking at all of you directly, saying that you should be donating as much as you can for the people who don’t have that money.”

She added: “Hold every single person in your own personal life accountable, even though it’s uncomfortable.”

Johns urged people to sign online petitions, make donations and “keep yourselves educated on what is going on.” He told the crowd they shouldn’t watch “the news, that is paid propaganda. I highly suggest you go to sources that are real. You see the videos. I highly suggest that you go check those out,” even though some of them are violent.” 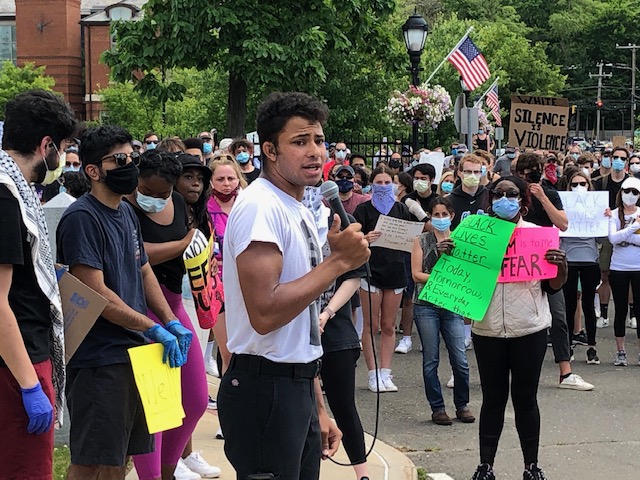 Max Johns, one of the organizers of the event, speaking in front of Police Headquarters.