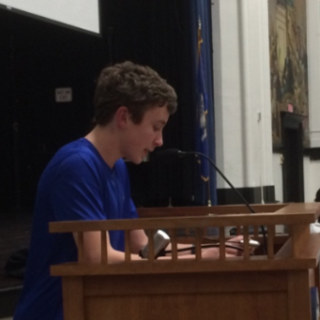 Robbie Gaaserud, captain of the DHS Freshmen Soccer Team, spoke Tuesday evening, Feb. 2, to ask the Board of Education to support money for uniforms. A week later, the superintendent announced they'll be coming.

It looks like Robbie Gaaserud, captain of the freshman soccer team at Darien High School, will get the school district to buy new uniforms for the team, along with two other underclassmen sports teams at the school.

Although the budget wasn’t changed to reflect it, the school district will spend money in the next fiscal year to provide new uniforms for the boys soccer team, Schools Superintendent Dan Brenner said Tuesday night at  Tuesday night’s Board of Education meeting. Two other, unidentified freshmen teams also will get uniforms, he said. 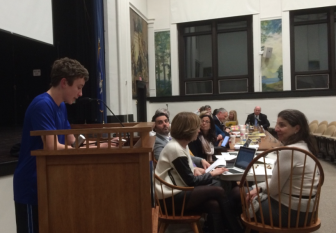 Robbie Gaaserud, captain of the DHS Freshmen Soccer Team, spoke Tuesday, Feb. 2, to ask the Board of Education to support money for uniforms. A week later, the superintendent announced they’ll be coming.

A week before, on Tuesday, Feb. 2, the 14-year-old ninth grader was one of the members of the public who spoke to the Board of Education about next year’s schools budget at a public hearing in Town Hall.

“My enthusiasm for the coming season was crushed the day that the coach handed out uniforms to the team,” Gaaserud said. “The uniforms were in poor shape, dirty and — worst of all — did not match. At times, we fielded a team of 11 players in FOUR different styles of jerseys.

“Many of my teammates did not wear the shorts issued, because they were either so dirty, large or had no elastic left. In one of my games, I couldn’t focus on playing my best because I was more concentrated on making sure my shorts didn’t fall off.”

One of the problems with the team’s uniforms, he said, were that they received used ones from previous year’s upperclassmen team — and those are not only in poor condition, but often too big for the smaller underclassmen who are still growing.

Gaaserud got some laughter as he spoke about the ridiculous situation, then applause afterward from the audience of about 70 in Town Hall Auditorium.

A week later, at Tuesday night’s Board of Education meeting, Brenner was asked by board member Callie Sullivan asked about the line item for interscholastic uniforms in the proposed education budget.

“Did that include uniforms for freshman teams?” Sullivan asked.

“It includes — there was an interesting conversation that took place at the budget committee meeting,” Brenner said.

“Right now that does include three freshmen team uniforms,” he said. “So this plan currently includes a three-year cycle of replacement and a one-time purchase of freshmen uniforms for three separate teams. […]

“There was some sentiment from board members who were at that meeting — they wanted the administration to use their judgment around the underclassmen uniforms and, if need be, redirect some of the funds that are in this three-year cycle to make sure that our student athletes who are underclassmen are properly clothed.

“And so we’re not asking for additional funds and the board wasn’t recommending that. They were asking us to exercise judgment so that what the young man who came that night at the public hearing [at this point, the audience started laughing]— well, his voice did a great job of advocating for what the board members on Monday thought was correct, and so in that spirit we’re going to honor that, take a hard look and make sure we’re doing the right thing by underclassmen.”

Brenner also seemed to indicate that the district wants to follow a system of evaluating each sports team’s needs in uniforms in a fair way, so while administrators agreed to get new uniforms for three freshmen teams, it tried to do so, he said, while “at the same time maintaining the integrity of this three-year cycle. We’re going to try to accomplish both.”

After Brenner’s explanation, the Board of Education dropped  the matter without a vote.