SantaCon is “a charitable, non-commercial, non-political, nonsensical Santa Claus convention that happens once a year to spread absurdist joy,” say the organizers. The event for Santa-dressed bar hoppers takes place Saturday, Dec. 8, as early as 10 a.m. in New York City.

The starting point is at Plaza 33, at 33rd Street and 7th Avenue in Manhattan. Organizers have released a list of venues on this Web page (keep scrolling). You can find out more on the official website.

Metro-North also has something to tell those dressing up as Santa for a bar-hopping good time in the city: No booze on trains or stations:

Metro-North wishes you an orderly Christmas season, SantaCon attendees, and just to help out, they’re banning booze from trains and even stations for 24 hours this weekend. Here’s the Metro-North announcement: 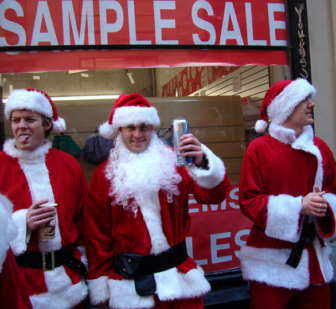 Photo from User istolethetv on Flickr (via Wikimedia Commons

Alcohol will not be permitted on Metro-North trains and stations from noon, Saturday, Dec. 8 through noon, Sunday, Dec. 9, to maintain safe and orderly travel during this weekend’s SantaCon event.

MTA police officers will be on duty at Grand Central Terminal and stations throughout Metro-North territory, as well as on trains to enforce this 24-hour restriction.

MTA police will confiscate alcoholic beverages and issue summonses carrying fines or imprisonment. Violators may also be subject to removal from the train or station by police.