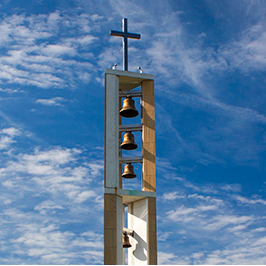 Sacred Heart University has established an online forum to help rebuild the Catholic Church in a time of disunity and spiritual decay.

The forum, “Go, Rebuild My House,” will serve as an open forum and allow experts from all over the world to contribute posts.

When news broke in late summer about U.S. bishops covering up sex crimes committed by priests, SHU President John J. Petillo knew the University could have an important role in shaping what would happen next.

Petillo said the Church has lost its way, and it is due time the University follows the vision of Saint Francis of Assisi and helps to rebuild it.

“We at Sacred Heart believe, as an institution of higher learning, in the Catholic intellectual tradition. We have an obligation to engage in continuous and constructive discussion around meaningful reform,” Petillo said. “We will, as instructed in the dream of Francis, work with others to go and rebuild the church.”

Some of the Contributors

Higgins, distinguished professor of Catholic thought at SHU, talked with Petillo and other senior administrators about how to move forward, and they put together a strategy that included this kind of forum. “We wanted to develop a platform for intelligent conversation,” Higgins said.

His next task was finding a group of commentators who would join the conversation. He reached out to journalists, theologians and academics, most of whom welcomed the opportunity to contribute.

“It’s a good pool of people,” Higgins said of the group, which comprises lay people with diverse backgrounds who come from various parts of the world. These contributors are tasked with writing current, timely and accessible 750-word posts that will focus on reform in the Catholic Church.

Higgins said the forum is a means to keep the dialogue going, to keep people informed and to keep them engaged.

“We have to move beyond the outrage,” Higgins said, referring to reactions to the abuse that occurred and that Church officials covered up for decades. “Outrage is important, but we have to get to the point of asking ‘What are we going to do about this?’”

The new forum is ideally suited for a university, Higgins said. “Universities generate ideas. This is an appropriate thing for SHU to do.”

As the second-largest independent Catholic university in New England, and one of the fastest-growing in the U.S., Sacred Heart University is a national leader in shaping higher education for the 21st century.

SHU offers more than 80 undergraduate, graduate, doctoral and certificate programs on its Fairfield, Conn., campus, which is located about an hour from Manhattan and 2.5 hours from Boston. Sacred Heart also has satellites in Connecticut, Luxembourg and Ireland.

Sacred Heart is rooted in the rich Catholic intellectual tradition and the liberal arts, yet at the same time develops students to be forward thinkers who enact change—in their own lives and professions and in their communities.

A spirit of service, entrepreneurship and social justice is the essence of who we are and can be seen inside and outside the classroom as students learn how to make a difference far beyond Fairfield.

The Princeton Review includes SHU in its Best 384 Colleges–2019 Edition, “Best in the Northeast” and Best 267 Business Schools–2018 Edition. It also placed SHU on its lists for “Happiest Students” and “Most Engaged in Community Service,” each of which comprises only 20 U.S. schools. Sacred Heart has a Division I athletics program. www.sacredheart.edu