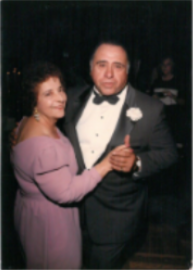 He was born in Port Chester, New York on Nov. 4, 1924 to the late James and Angelina Scilla Engongoro.

Rocco was a veteran of World War II in the U.S. Army. After serving his country, he decided on a career in landscape services in 1950 and started working for a local landscape company in Darien.

In 1956 Rocco decided to make his own way in life and started his own company, called Roccie’s Asphalt Paving until 1998.

After his retirement, he enjoyed spending time with his grandchildren, great grandchildren, and his many friends, as well as cooking fabulous meals. He also enjoyed woodworking, gardening, and was an avid fan of the Yankees, Giants and UConn Women’s Basketball.

Rocco has been a longstanding member of the Piedmont Club and the Old Timers Athletic Association of Darien and was an avid ballroom dancer attending many social functions at local organization based events.

Besides his parents, Rocco was predeceased by his wife, Mary Virginia Altieri Engongoro, in 1998; his daughter, Cynthia Ann Wallman, and a brother, Joseph Engongoro.

In lieu of flowers, the family request that donations be made in Rocco’s memory to Curtain Call, 1349 Newfield Avenue, Stamford, CT 06905