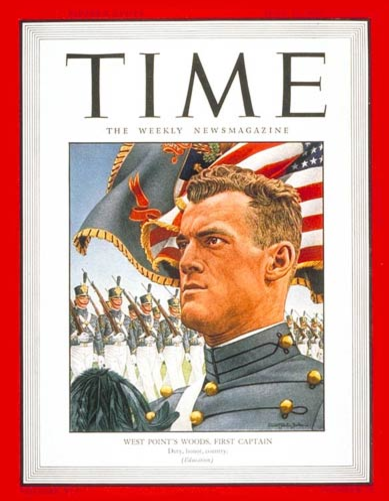 Robert Woods as a West Point cadet, on the cover of Time magazine in 1945

Mr. Robert Evans Woods, a much loved and respected long-time resident of Darien, passed away peacefully on May 30. He was 96. 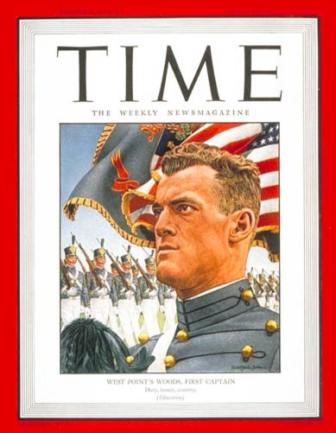 Robert Woods as a West Point cadet, on the cover of Time magazine in 1945

Bob was born in Corning, N.Y. to Arthur and Eleanora Woods. He attended Bucknell prior to transferring to the U.S. Naval Academy, and then moved on to West Point.

He was chosen to command the Corps of Cadets as first captain during his final year, and appeared on the cover of Time magazine as such in June 1945.

Bob was cited as “a man who was able to command, willing to obey, eager to serve, quick to learn, honest, strong, and able.”

An all-around athlete who participated in football, track, baseball, wrestling, fencing and boxing, he is in the West Point Athletic Hall of Fame as the only man to have been on the starting team for both Annapolis and West Point in the Army-Navy game. He married Geraldine Harrington the day after he graduated from West Point; their wedding was featured in national newsreels.

Bob served under General Douglas MacArthur in the Allied occupation of Japan at the end of World War II. After nine years in the military, he entered the corporate world with Schaefer Brewing Company. Over his 40-year business career, he also worked as an executive at Continental Can Company and Doubleday & Co.

Bob was as gifted musically as he was athletically, and began playing the trumpet at age 13 with jazz bands in local bars and dance halls — an experience that produced countless amusing anecdotes. Music remained a passion for the rest of his life. He was a pioneer of Sunday Jazz at the Tokeneke Club, continuing to play and lead bands until he was 94.

Bob was a consummate gentleman, and will always be remembered for his keen interest in people, outgoing personality, quick wit, raw talent, and the twinkle in his eyes.

He is survived by his wife of 72 years, Geraldine, three sons and their wives: Bob Jr. and Mary, Jerry and Kate, and Chris and Debbie; seven grandchildren and three great grandchildren.

A memorial service will be held at St. Luke’s Episcopal Church in Darien at 1 p.m., Thursday, June 29, followed by a reception at the Tokeneke Club in Darien.