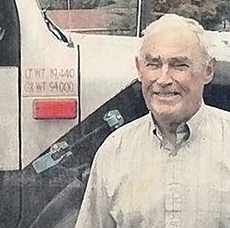 Douglas Campbell, a former member of the Darien Police Commission and chairman of the board at Ring’s End Inc., passed away Monday morning at his home in Sanibel, Florida, the company said in a brief announcement. 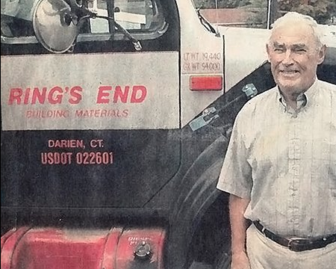 Douglas Campbell was chairman of the board at Ring’s End Inc. of Darien.

Campbell started at Ring’s End, headquartered on West Avenue, 63 years ago, in 1955.

At Monday night’s Board of Selectmen meeting, Stevenson said:

“I would like to sadly announce that former police commissioner and long-time resident and business owner Doug Campbell passed away, unfortunately.

“He lived a great life; he was 90 years old; and I’m sure we’ll find out what […] services may be planned for him, but if you know his family, either Nancy Herling or any of the Campbell family, please extend your condolences.”

Here’s the brief announcement, as posted on Facebook, followed by the company’s own description of itself, elsewhere on its Facebook pages.

Ring’s End started more than a century ago in Darien but has expanded far and wide while Campbell was one of its leaders. Further information is expected later.

It is with great sadness, that we announce the passing of Douglas G. Campbell, the Chairman of the Board of Ring’s End Inc.

Douglas passed away peacefully today, at 7 a.m., Dec. 17, 2018, at his home in Sanibel, Florida surrounded by his family. Doug started at Ring’s End in 1955, he was our leader, mentor and devoted to the success of Ring’s End and all of its employees.

Ring’s End was founded in 1902 in Darien, Connecticut which is situated on Long Island Sound in the southwestern corner of the state.

Originally, Ring’s End supplied the surrounding area with coal, grain, hay, feed and flour by the barrel which was delivered up the Goodwives River by small sailing vessels and offloaded at the company’s small wharf.

In its second century the company has continued to expand, opening Ring’s End of Wilton in 2005, Ring’s End of Branford in 2006, and the new concept store, Ring’s End Paint & Design of Norwalk in 2010.

We are Connecticut’s most prominent retail lumber, millwork and building specialties companies, with a reputation for offering premium quality products at extremely competitive prices, excellent service and a knowledgeable, well-trained sales staff.

We have one of the largest and most diverse inventories to satisfy the needs of the largest home builder, as well as remodeling contractors and do-it-yourself consumers.