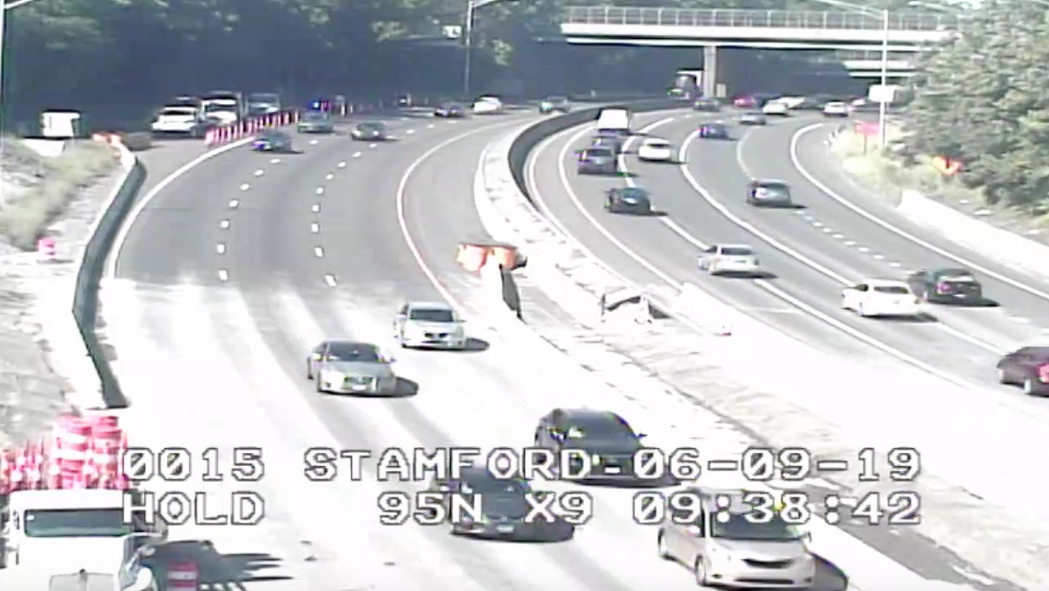 The view from near the bridge, looking southwest. Northbound-side traffic is approaching the underpass, southbound -side traffic on the right has just left it. (The bridge at the top of the picture is on Blatchley Road in Stamford.)

UPDATE, 9:44 a.m.: The highway project is over, at least as far as Interstate 95 traffic is concerned.

Here’s the view from the traffic camera pointed southwest from the (new) Exit 9 bridge, showing traffic in both directions approaching and leaving the underpass: 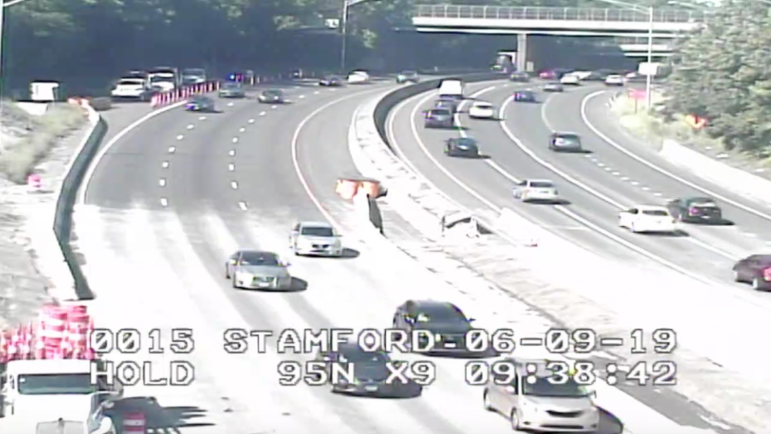 The view from near the bridge, looking southwest. Northbound-side traffic is approaching the underpass, southbound -side traffic on the right has just left it. (The bridge at the top of the picture is on Blatchley Road in Stamford.)

REMINDER: Second Tough Traffic Weekend for Darien as I-95 Exit 9 Shuts Down

Traffic is moving in both directions, up to and through the detour ramps at Exit 9 on Interstate 95, as the project to replace the bridge over the highway continues.

Traffic and construction cameras livestreaming from the i95Exit9.com website as well as other Connecticut Department of Transportation cameras show the expected backups and slowdowns, but it’s no parking lot of stopped cars on either side.

This backup on the southbound-traffic side of I-95, by the Darien South rest stop, is moving, as the two-second snapshots on the ConnDOT website reveal:

The Darien South rest stop is on the right as traffic backs up before the construction site at Exit 9. The backed-up traffic is moving. The span on the right of the Route 1 bridge over I-95 is being replaced this weekend — the last of the two bad-traffic weekends, if all goes well. 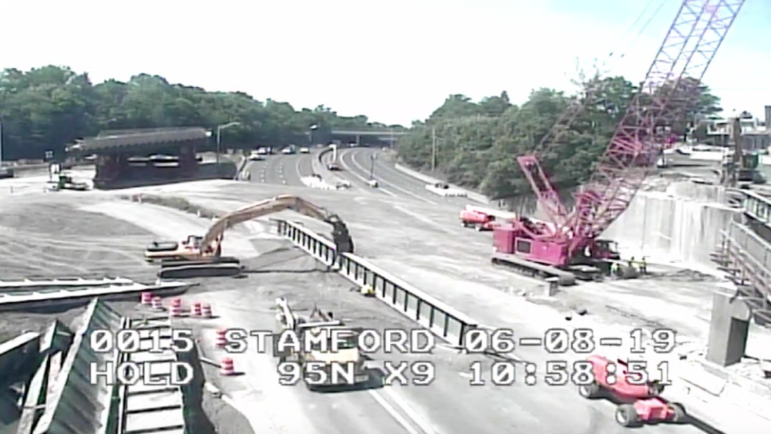 This screen-grab from the livestreaming camera on the i95Exit9.com website shows traffic (which is flowing) onto the detour ramp on the northbound side (in the back, at left) and on the far right, near the top, traffic flowing across Route 1 on the southbound side. 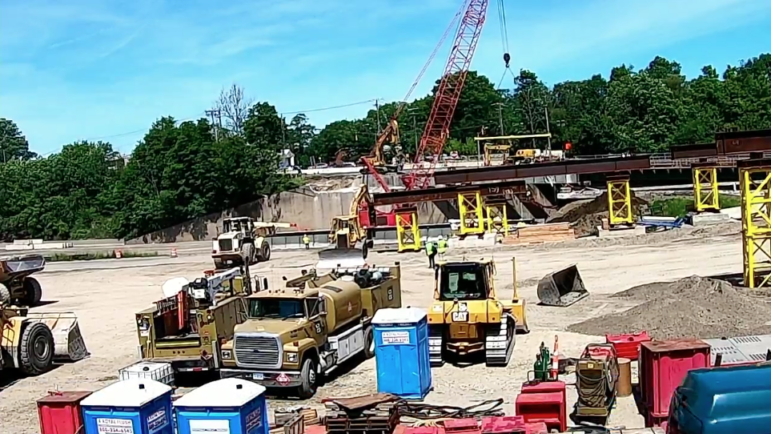 The "site camera" livestream shows traffic moving around the construction site, where it appears the last beams of the old bridge — as old as the highway itself — are being removed.

Traffic backed up but still moving in Stamford, near Exit 8.

Some traffic congestion just before Exit 11 is seen on this livestream image (southbound side is on the right).

Here’s this weekend’s  announcement from the Connecticut Department of Transportation on the ongoing bridge replacement project. The closure days and times follow the same pattern as last weekend, although the highway traffic was restored by Sunday morning, roughly a day before the Monday 5 a.m. deadline:

The Connecticut Department of Transportation is reminding motorists that the second of two scheduled weekend closures and detours of I-95 in Stamford at Exit 9, is set to begin on Friday, June 7, 2019.

The closures are necessary to facilitate the installation of two new bridge structures carrying Route 1 over I-95 utilizing Accelerated Bridge Construction (ABC) techniques. MOTORISTS ARE STRONGLY ADVISED TO AVOID THE AREA DURING THE CLOSURE TIMEFRAMES TO AVOID HEAVY TRAFFIC DELAYS.

The closure will occur on Friday, June 7, 2019, and follow this schedule:

5 AM – Route 1 will be OPEN to through traffic

Utilizing ABC techniques, both the east and west spans of the new bridge superstructures were constructed off-line (with virtually no traffic impacts) in the infield area of the I-95 northbound Exit 9 on-ramp. During the two scheduled weekend closures, the existing spans will be demolished and the new spans will be lifted and set onto piers and abutments using SPMT’s (Self Propelled Modular Transporters). One span will be removed and replaced per weekend closure.

By utilizing ABC as opposed to conventional construction methods, the majority of traffic impacts associated with the project are condensed into the two scheduled weekend closures.  If conventional construction methods were used, multiple years of lane closures on I-95 as well as Route 1 would have been required, resulting in daily and significant traffic congestion in the vicinity, particularly during weekday morning and afternoon rush-hours.

Six hundred and twenty eight cubic yards of concrete weighing over 1.5 million pounds was used to build the two bridge spans. About 32 miles of rebar was installed within the newly constructed bridge spans, and all new structural steel was used to create the new bridge superstructures.  Each individual span to be lifted and set into place weighs approximately 1.6 million pounds, and 1.8 million pounds respectively.

The CTDOT has established a project website, www.i95exit9.com. There will be live streaming video feeds of construction throughout the weekends when the bridge spans are installed.