Update: First Selectman Jayme Stevenson tweeted at 7:36 p.m.: “Found the culprit: fire on the lines on Leroy near the railroad. Power has been restored.” 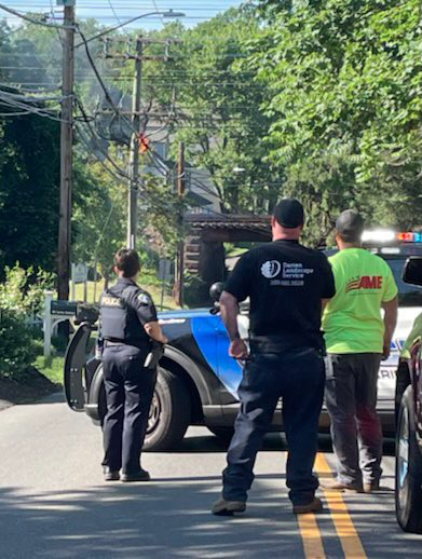 First Selectman Jayme Steven tweeted the picture above with this message: “”Found the culprit: fire on the lines on Leroy near the railroad. Power has been restored.”

Update: 6:46 p.m. — Power came back in Darien as of 6:37 p.m., Eversource’s online Outage map says. Customers without power: “fewer than two,” according to the Web page.

Update: 6:36 p.m. — All 221 Stamford customers who were without power had it back by 6:27 p.m., according to Eversource’s online Outage map. But Darien still has 365 customers without power.

As of 6:16 p.m., there were 365 customers without service in Darien and another 221 in Stamford, according to Eversource’s online Outage map.

Original article: 6:13 p.m. — Darien police say a transformer explosion has resulted in a power outage downtown, and traffic lights have been affected.

Here’s the full announcement from Marron, the commander of the Police Department’s field services bureau:

“The Darien downtown area has experienced a power outage due to a nearby transformer explosion.  Several significant intersections have no power to traffic signals.  Treat theses intersections as “4-way” stop signs. Thank you and drive safe.”