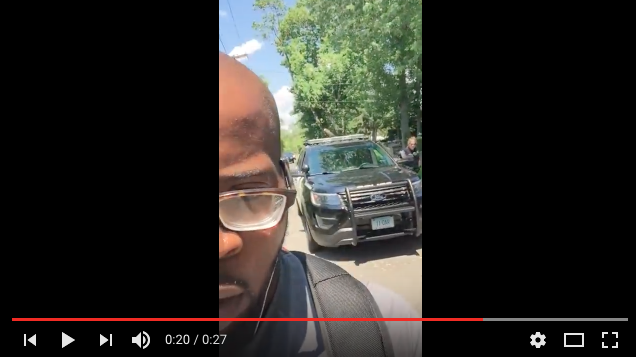 Image from a video posted to YouTube by Matthew McGee, showing him and a Darien police officer leaving a patrol car in Tokeneke.

More details came out Monday about a recent Darien police traffic stop of a black man who was riding his bicycle to work in Tokeneke that is alleged to have been a case of racial profiling. The details have come from both police and the man who was stopped.

The man, Matthew McGee of Bridgeport, spoke from the audience at Darien Library toward the end of a panel discussion on the general topic of race relations in America.

McGee said the traffic stop was disturbing. He said police shouldn’t have suspected him of anything, and that he was minding his own business riding his bicycle to work.

In the past, he said, he had been stopped numerous times by police while driving a car and indicated he didn’t believe all of those stops were for legitimate reasons, either. He had grown up in Mississippi and had even been stopped when he was a child there, he said.

Interviewed outside the meeting room, McGee said the police officer had followed him as he was riding the bike for about four minutes, and the traffic stop had taken about 15 minutes before he was allowed to continue on to his workplace at the Tokeneke Club.

After McGee left the room, Dr. Anthony L. Bennett, Head Pastor of Mount Aery Baptist Church and who acted as an emcee for much of the event, commented, “Ninety-five to 99 percent of black men in this country have the same story [as McGee].”

A police spokesman earlier in the day said the stop occurred very shortly after a report came in about a burglary in Tokeneke and that the man on the bicycle looked like a person police suspected of helping burglarize the home (but a police spokesman said he had little information beyond that.

Police Chief Duane Lovello said Monday night that he had been away and had very little information on the matter himself, so he wouldn’t be adding anything immediately.

Still not known: What was the description of the suspect that fit with how the man on the bicycle looked? What did police think the actual suspect might have done (that burglary? some other in the area?)? Was anyone else stopped while traveling through the area?

(Special police working for the Tokeneke Association have in the past stopped bicycle riders on the neighborhood’s private roads to make sure that they either live in the neighborhood or have business there, as McGee did.)

A controversial traffic stop of a black Bridgeport man riding a bicycle to work in Tokeneke two weeks ago happened just after Darien police had been alerted to a burglary in the neighborhood, a police spokesman said on Monday.

And, the spokesman said, Darien police were looking for someone, a possible accomplice in the burglary of a man who resembled the bicycle rider — who turned out to be a cook going to his job at Tokeneke Club.

Since the investigation of the burglary on Old Farm Road had just started, police had been reluctant, earlier, to mention that they had information on what one of the burglars looked like, the spokesman said.

The spokesman, Sgt. Jeremiah Marron, who also works in the department’s Detective Bureau, said the traffic stop appears to have taken place only about 15 minutes after the burglary had been reported (it was reported at abut 12:40 p.m. on Sunday, July 17, according to Darienite.com’s report about it). He said more information connected to the traffic stop may be released soon.

Image from a video posted to YouTube by Matthew McGee, showing him and a Darien police officer leaving a patrol car in Tokeneke.

Police Chief Duane Lovello may release it, Marron said. He added that Lovello may be attending a panel discussion on the subject of race relations in America starting at 6:30 p.m. Monday at Darien Library. 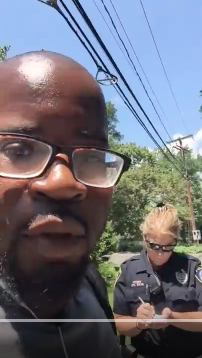 Image from Matthew McGee’s third video on YouTube showing the incident. The officer who stopped him is shown.

Some of McGee’s three YouTube videos have been viewed at least 50,000 times since they were posted on July 18, according to YouTube. The online petition, submitted by Jack Jones, has 88 supporters, with a goal of 1,000.

Here’s Darienite.com’s original article on the incident, with the videos and full text of the petition, along with some of the comments attached to it from supporters of it.

Here are the videos (the third one involves the stop itself; the other two show him just before the stop):

Warning: They contain profanity, not directed at the officer, but with McGee talking to himself and the camera phone in an undertone:

Editor’s note: At 4:25 p.m., additional information about the Old Farm Road burglary and its connection to this traffic stop was added to the article, along with a link to Darienite.com’s original article about that burglary.