A 28-year-old driver under the influence of medication crossed into the oncoming traffic lane on the Post Road during the late afternoon rush hour, crashing head-on into another car, Darien police said.

The crash occurred just before 5:38 p.m. Friday, Sept. 20, according to police in an announcement Tuesday about the man’s arrest.

Darien Police Department, which has become less consistent in the past year or so about issuing information on incidents, particularly traffic accidents, didn’t issue an announcement about the incident for more than a month after it happened, and only when the man was charged with driving while under the influence.

Police did not say whether or not anyone was injured in the car, a Honda Civic, that was hit by the 28-year-old driver, or whether they were treated by medics or taken to a hospital. The 28-year-old, Lakeem Jetter of Bridgeport, was taken to Stamford Hospital.

Police gave this additional information about the matter, including accusations not proven in court: 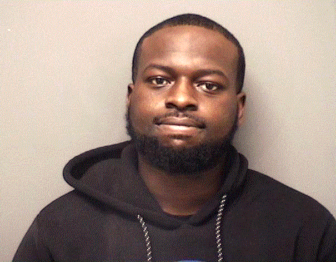 Arrest photo of Lakeem Jetter, 28, of Bridgeport, charged with driving under the influence, without insurance and failure to stay on the right side of the road.

The accident took place on the Post Road near its intersection with Hampton Road, just west of the Darien YMCA (and about a half mile from the Stamford border).

Based on witness accounts, it was determined that Jetter’s vehicle had been traveling east on the Post road, swerving several times over the double-yellow marker lines, and changing speeds dramatically. Jetter’s vehicle ultimately crossed the double yellow line striking a westbound vehicle head on.

Police were told that as Jetter drove east in a tan Buick sedan, he swerved several times over the double-yellow line and changed speeds dramatically before crossing the double line again and striking the other car.

Jetter was treated for some minor injuries. When officers spoke to him, they saw that his eyes were bloodshot and glassy. Medical personnel treating him saw that his eyes had pin-point pupils and in their opinion, he seemed to be under the influence of something.

When officers talked with him, he seemed confused about where he was, and he went in and out of consciousness several times, although each time he became fully alert again. When asked about the incident, he gave several different versions.

The police announcement did not say he smelled of alcohol or that there was any indication he had been drinking.

But when police did an inventory of his car’s contents before it was towed, they found an open package of Suboxone, a brand name for a prescription medication that can be used for pain treatment or addiction treatment.

The police announcement said: “officers believed Jetter had been operating his vehicle under the influence of an intoxicating substance.”

According to AddictionCenter.com and other medical websites, Suboxone is extremely unlikely to produce euphoria, although fatigue, not intoxication, is a common side effect.

Suboxone can be abused by combining it with other substances, including alcohol. Police did not say they found any evidence at the scene or in any hospital reports that Jetter had combined the medicine with any other substance that could result in him getting intoxicated.

Nevertheless, police applied for an arrest warrant, which a prosecutor and a judge approved. On Nov. 3, Jetter turned himself in at Darien Police Headquarters.

He was charged with driving under the influence, failure to insure a motor vehicle and failure to drive on the right side of the road. Jetter, a resident of Grove Street in Bridgeport, was released on a $250 bond and is scheduled to appear Nov. 18 in state Superior Court in Stamford.