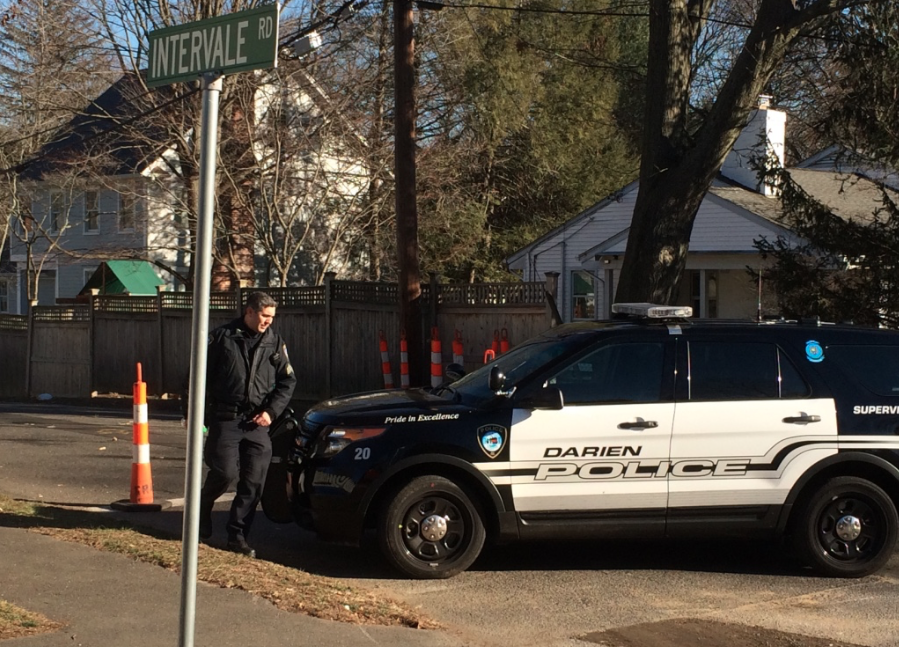 A police patrol car blocks Intervale Road at its intersection with Holmes Avenue. The road remained blocked as crews from Eversource continued working even after the rupture in a natural gas line was sealed.

The driver of a car that went off the road and hit a fence was charged by police with driving under the influence — apparently of Oxycontin, police said.

Police were called to St. Nicholas Road at its intersection with Mansfield Avenue at 4:52 p.m. (a minute before sunset) on Wednesday, Jan. 15 and spoke with the 46-year old driver, a New Canaan man.

The police announcement did not say whether the man had any injuries, what kind of car he was driving or describe whatever damages may have occurred, either to the car, the fence or anything else.

The driver said he swerved to avoid a cat. The officer speaking to the driver noted that the man seemed to be under the influence of a substance, although the officer didn’t smell an alcoholic drink coming from him.

A police officer saw a plastic bag in the driver’s shirt pocket, and the driver said it contained Oxycontin, a prescription opioid medication.

When questioned, the driver said he had a prescription for the pills but didn’t have proof of it with him, or the original container. He said he had taken one of the pills earlier in the day.

He performed standard field sobriety tests for police, but not adequately.

The driver was arrested on charges of driving under the influence, possession of narcotics outside its original container, possession of a controlled substance and failure to drive on the right side of the road.

At Police Headquarters, while the driver was being processed for his arrest, he submitted to urine testing. He was released on a $500 bond and is scheduled to appear Wednesday, Jan. 22 in state Superior Court in Stamford.