A 33-year-old man, stopped by a police officer on the Post Road sometime past midnight on Sunday, Nov. 7, had more than three times the legal blood-alcohol content in him for driving, Darien police said. 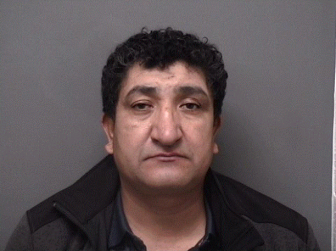 Edgar Lima-Barrera, 33, charged Nov. 7 with driving while under the influence

Edgar Lima-Barrera was driving west on the Post Road (police didn’t say where on the road) when a police officer saw his car cross the double yellow line into the eastbound traffic lane. The officer had the driver stop.

When talking with Lima-Barrera, the officer smelled a strong odor of an alcoholic drink and saw that the driver’s eyes were red and glassy. Lima-Barrera performed field sobriety tests for the officer, but didn’t complete them to standard.

He was charged with driving while under the influence and failing to drive on the right side of the road. At Darien Police Headquarters, he was given two breath tests. The first showed his blood-alcohol level at 0.2415, just over three times the 0.08 legal limit. The second was a hairsbreadth under three times the limit — 0.2398.

Lima-Barrera, a resident of Robin Street in Stamford, was later released on a $50 bond and told to appear Nov. 17 in state Superior Court in Stamford.