The owner of a house on Middlesex Road was woken up at 2:39 a.m. by a crash, and looked outside to see a vehicle against her home as the driver tried to start the car up again, police said.

The driver couldn’t start it, then left the scene, but police found him and gave him a sobriety test — which he passed, police said. 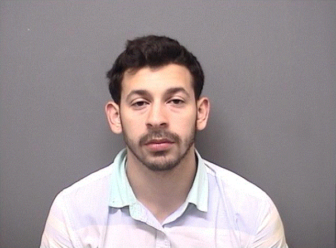 Santiago Giraldo, 22, of Ferris Avenue in Norwalk was charged with not stopping for a stop sign and leaving the scene of an accident on June 8.

Darien police gave out this further information about the Saturday, June 8 incident, including accusations not proven in court:

When police arrived at the house in the area near the intersection of Middlesex Road and Ox Ridge Lane, they saw the vehicle, which had apparently driven through bushes on the property before striking the house. But they didn’t see the driver, either in the car or anywhere nearby.

Almost two hours later, at 4:28 a.m., a homeowner about 1,500 feet south, just past the intersection of Saddle Ridge Road and Middlesex Road, called police to say that someone was knocking on his front door, asking for help. Officers went to that house and, in the area, found Santiago Giraldo, 22, of Norwalk.

Giraldo told police he was unfamiliar with the area and had lost control of his vehicle while trying to manipulate his GPS (editor’s note: perhaps he was referring to the mapping app on his phone).

He also admitted that he had been drinking alcohol before driving. He was given field sobriety tests, and he was able to perform them.

Giraldo, who lives on Ferris Avenue in Norwalk, was arrested on charges of evading responsibility (also known as leaving the scene of a motor vehicle accident) and not stopping for a stop sign. He posted a $1,000 bond and was released at 8:15 a.m.

Giraldo was scheduled to appear last Tuesday, June 18 in state Superior Court in Stamford, the Judicial Branch website had no information on his case.