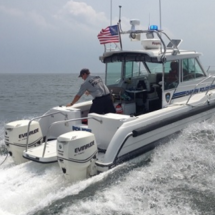 A 40-year-old Darien man who was rescued with three friends when his boat hit a rock off of Hay Island on Sept. 3, now is charged with operating a vessel while under the influence of alcohol.

Darien Police Department’s former Marine Unit boat that was still in use when this incident took place. (picture from Darien Police website)

The man took his 2000 Jupiter powerboat south from Ziegler’s Cove when it hit the rock near Hay Island, off of Long Neck Point. Police and firefighters were called to the scene at 8:41 p.m. When officers in the Marine Unit and firefighters in the Noroton Fire Department’s boat arrived at the scene, the 30-foot-long boat was completely out of the water, although it was still in one piece.

One passenger on the boat was taken to land by a neighbor in a kayak who saw the boat. Police and firefighters took the other three to shore. One occupant of the boat had a fractured ankle. The Darien man who was charged had bumps and bruises and was taken by an ambulance to Stamford Hospital.

A police officer smelled alcohol on the man’s breath, and police later applied for and received a search warrant to get the man’s medical records, to see if he had too much alcohol in his blood.

According to the hospital records, he did — with a blood-alcohol level of 0.19, more than twice the legal limit of 0.08. Police then applied for and received an arrest warrant. The man was told it had been issued.

On Saturday, Nov. 12, the man, a resident of Redcoat Pass, turned himself in at Police Headquarters. Along with the charge of operating a vessel while under the influence of alcohol, he was charged with reckless boating, operating an unregistered vessel and failure to report a change of address for his boating certificate.