According to police, a 58-year-old man who appeared intoxicated (1) grabbed change from the tip jar at the Dunkin Donuts store downtown and put it in his pocket; (2) got agitated and tried to push a police officer when asked about that; (3) resisted arrest; (4) yelled profanities and racial slurs when arrested; (5) kicked at officers after they got handcuffs on him.

That, police said, was how Kevin Oshea of Ardsley Road in Stamford spent part of his Friday night. Most of his Saturday was spent in jail. He’s scheduled to spend much of his Monday, Sept. 24, in court. 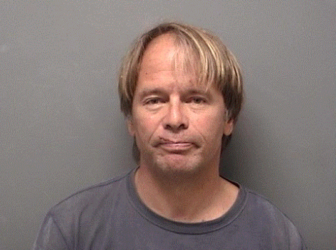 (1) Sometime before 10:39 p.m., Friday, Sept. 14, Oshea ordered food in Dunkin Donuts at 967 Post Road, next to Darien Railroad Station. At some point, he began taking change out of the tip jar on the counter. Store employees later told police he took about $2 (and police later found $1.99 in change in one of his pockets).

He also refused to pay for the food. When Darien police arrived, a Metropolitan Transportation Authority police officer was at the scene already (whether that was for professional or personal reasons, police didn’t say).

(2) Officers immediately saw that Oshea seemed to be intoxicated. When they tried to talk with Oshea, he became agitated and tried to push the MTA officer.

(3) Police physically restrained Oshea and tried to handcuff him, which he resisted while (4) yelling profanities and racial slurs at the officers and in the presence of others. They handcuffed him and put him on the floor in a seated position.

(5) During the struggle, he tried to kick the officers and continued to try to kick them when he was seated on the floor.

Oshea was charged with sixth-degree larceny, resisting arrest and breach of peace. He was arrested and held on $1,000 bond until 7:15 p.m. the next day, when he was released. He is due to appear next Monday, Sept. 24, in state Superior Court in Stamford.