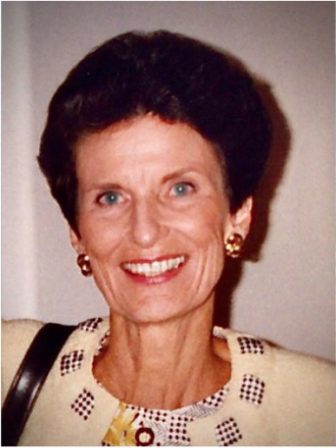 Margaret “Peggy” Van Munching passed away on Jan. 2. Her funeral will take place at a later date.

Born in Duluth, Minnesota in 1931 to Joseph Roland Pratt and Patricia McGill Pratt, Peggy attended the Holy Angels Academy in Minneapolis and the University of Minnesota.

She worked as a local print and runway model for several Minneapolis-area department stores, including Young-Quinlan and Dayton’s.

It was on a double-date that Peggy met her future husband, who’d flown to Minnesota from Connecticut to meet … her friend. The next day, he asked Peggy out instead, and some months later he proposed.

Peggy and Leo Van Munching Jr. would remain together until his death in 2016.
They were wed in 1953, and briefly settled in Greenwich before moving to Chicago, where their first seven children were born. There, Leo opened the Midwest office of Van Munching & Co., then the exclusive U.S. importer of Heineken. (Peggy loved to tell people she was married to “a beer peddler.”)

A brief return to Connecticut saw the birth of their eighth child. They then relocated for Leo’s job yet again, this time to Southern California. Peggy and her family settled for good in Darien in 1972. Years later, Heineken would honor her indirect service to the company by arranging to name a new strain of gerbera daisy the “Peggy.”

The phrase “homemaker” does scant justice to Peggy: her eight children once figured out that she spent five years of her life pregnant — within a span of just 10 years, and with no twins — though they gave up when trying to estimate how many school lunches she packed, dinners she cooked, tearful children she soothed, and parent-teacher conferences she attended. She did all without complaint, and with great pride in the children she raised.

As her kids went off to college, Peggy shifted her role from homemaker (and drill sergeant) to that of volunteer and benefactor. She drove for Meals on Wheels for several years, and began decades-long relationships with charities such as the Breast Cancer Alliance and City Harvest, along with several schools, including St. Margaret Mary’s School in the Bronx.

Peggy gave so much attention to St. Margaret Mary’s ailing physical plant that the school half-jokingly named their new boiler for her. Because education was so important to her and her late husband, Peggy and Leo put several generations of extended family through college and graduate school.

Peggy has been an unfailing contributor to the Community Fund of Darien, the Food Bank of Lower Fairfield County, Darien Book Aid, the Darien Library, and countless other local charities.

She also donated to the University of California San Francisco Brain Center in honor of her late son, Leo Van Munching III, who passed away in 2018 from glioblastoma.

Each Christmas for several decades, Peggy sent friends and family what came to be known as the “Dearhearts” letter, updating them on her brood. Her holiday missives became so popular — and so anticipated — that when she briefly stopped writing them as her children got older, several friends called to complain. She resumed writing the letters until just a few years ago.

Her many and varied interests included reading voraciously, corresponding with friends from around the globe, drawing, fashion, lunches with local friends, baking — her chocolate chip cookies will be especially missed — and needlepoint. (Though not a sports fan herself, she needlepointed a Red Sox-themed belt for one of her sons. That belt was worn at six Red Sox World Series appearances — all victories.)

In 1965, her portrait was painted by Everett Raymond Kinstler, creator of several official portraits of U.S. presidents, two of which hang in the White House. She was a member of Wee Burn Country Club.

Along with her husband and son, she was predeceased by her granddaughter, Annebet, and her brother, Ron. Peggy is survived by her children: Jan (Charles) Phillips, Pieter, Paul (Heather), Tesa, Anne (Peter) Ardery, Philip (Emily) and Christopher (Kimberly); and her daughter-in-law, Laura. She was the beloved Nana to 12 surviving grandchildren, Kyle, Charlie, Brennan, Max, Anneka, Lily, Mia, Megan, Will, Anna, Maggie, and Leo IV, as well as four great-grandchildren, River, Rory, Harper, and Sutton. She is also survived by her sister, Nancy.

Due to the pandemic and Peggy’s oft-stated concern for the health of her friends and loved ones, a service will be scheduled at a later, safer date.

It was Peggy’s wish that, in lieu of flowers, contributions be made in her memory to City Harvest, New York’s largest food rescue organization.