Paul Edmund Brencher, Jr. passed away peacefully on Sept. 11, 2020 at his home in Jackson, Michigan with his daughters at his side. He was 88. 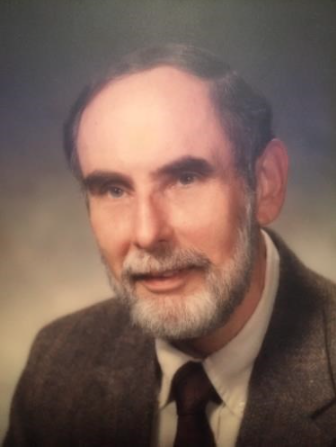 Born May 1, 1932 in Darien, he was the son of Paul Edmund and Vera Young Brencher.

He graduated from Darien High School in 1950, participating in basketball and the school newspaper. He attended Purdue University, where he earned a B.S. in electrical engineering and was a member of Theta Chi fraternity.

After graduating in 1955, he was employed by Consumers Power Company. He served in the U.S. Army from 1956 to 1958 in El Paso, Texas, where he organized a Fort Bliss softball team.

His work for Consumers took him to Flint, Michigan, where he met a fellow Consumers employee and future bride, Juanita Thompson. They wed in 1965 and were married for 34 years. They established a home near Brown’s Lake, where they raised two daughters.

During this time, Paul served as a deacon at the First Presbyterian Church and a Junior Achievement leader. Paul continued working for Consumers Power Company in engineering and accounting departments until his retirement in 1990.

Following retirement, Paul and Juanita volunteered together as tutors in Vandercook Lake schools and at the historic Mann House in Concord. They treasured time learning in elder hostel programs, particularly at the Campbell Folk School.

Paul was an avid gardener and bird watcher. He held long-time memberships in the Men’s Garden Club of Jackson and the Jackson Audubon Society and was a master gardener. In 1995, he helped found the Jackson County Daffodil Society, which annually plants bulbs to beautify Jackson parks and roadsides.

He spent many volunteer hours at the Dahlem Environmental Education Center tending the property and supporting the educational programs. He designed and installed gardens at the Mann House and at Dahlem.

Paul liked sharing his knowledge, both informally and through classes. Over the years, he taught on a variety of topics, including flower and vegetable cultivation, herbs and their uses, and gardening with native plants.

Paul deeply appreciated his friends in the community, particularly in the Men’s Garden Club, the Dahlem community garden, and the “Trekkers.”

Blueberry rice pudding and zucchini bread were special dishes that he cooked for the pleasure of sharing them. He was a beloved patron of Prime Cuts, where he was the unofficial taster of new foods.

Paul is survived by his sister, Paula Jensen of Greenwich; his daughters, Janis (Alex) Cooke and Sandra (Don) Campbell; grandsons, Noah, Stuart, and Joel; and three nieces and two nephews.

His gentle and unassuming manners and his willingness to share his deep knowledge of plants and their uses will be missed by many.

Friends are invited to drop in for an “open garden” at Paul’s house from 2 to 5 p.m.,  Saturday, Sept. 19. You are welcome to bring your own chair and beverage.

Donations in Paul’s memory may be made to the Nature Conservancy Michigan Chapter, Jackson College Foundation nursing program scholarships, or a conservation organization of the donor’s choice.

— an obituary from the Jackson Citizen-Patriot on Legaacy.com, where online condolences may be left (scroll down).