We are shocked and saddened to announce the unexpected passing of Pat Barton, age 67, a resident of Bolinas, Ca. on July 17 due to a pulmonary embolism. 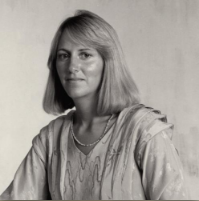 She was born in Stamford to Gordon Brittain Whelpley and Emilie Iselin Whelpley. She is survived by her husband, William G. Barton, their two sons, Will and Sam, and siblings Katharine Draper, Anne Shaw, and Gordon Whelpley.

Born on March 16, 1950 in Stamford, Pat grew up in Darien. She graduated from the Thomas School, attended Garland Junior College and Boston University, and, following her great passion, went on to the Culinary Institute of America. She also trained at the Pacific Basin School of Textile Arts in Berkeley.

— This obituary was previously pubished in the San Francisco Chronicle

Pat moved to California in the early 1970’s and briefly lived in Long Beach before moving to a unique mountain cabin in Mill Valley. She was an avid textile weaver.

She met Bill in the spring of 1977. They traveled together to Cowes, England as part of the support team of David Allen’s legendary yacht Imp. Pat and Bill were married in 1981 in Darien and returned to live in Mill Valley.

Patty had unique culinary skills. She was assistant chef in several establishments before getting married, including the Mountain Home Inn on Mt. Tamalpais, in Mill Valley.

She was the ultimate homemaker and mother to her children and a huge supporter of her husband’s interests and work. She had a heart of gold that touched all who knew her. She gave endlessly, selflessly, and enthusiastically to causes she loved and to people she cared about.

Pat volunteered selflessly in the communities she lived in. She and Bill moved to Ross in 1986 shortly after their first son, Will, was born, and after their second son, Sam, began school, she worked in the Ross School library.

The family moved to Bolinas in 2002, and for the last eight years she has helped at the Bolinas library and was serving on the board of directors.

Pat was an avid reader. She kept up with the news from all over the world and was outspoken about her liberal Democratic political views, particularly with like-minded friends.

She had a deep passion and curiosity for observing birds and wildlife in their habitats and volunteered as a docent for many years at Audubon Canyon Ranch on Bolinas Lagoon. As a member of the Bolinas Rod and Boat Club, she could always be seen helping out at any event. Along with her husband, Pat was also a Briones Lions Club member.

She loved her garden and taking care of her pets. All who knew her loved her. Her passing leaves a hole in many lives, and her wisdom and patience will be sorely missed.

In lieu of flowers, please consider a donation in her name to the Audubon Canyon Ranch (ACR), 4900 Shoreline Highway One, Stinson Beach, CA 94970. Thank you.