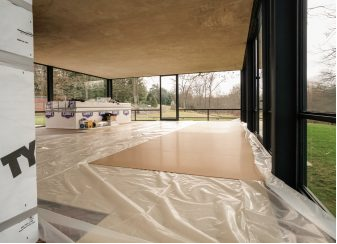 Inside The Glass House, whose ceiling is being replaced.

For years, even when its creator, Philip Johnson was still alive, the southwest corner of the plaster ceiling inside the Glass House in New Canaan has been sagging.

Inside the Glass House, where the ceiling is being replaced.

It’s been getting progressively worse in recent years — to the point where three of the doors into the iconic structure (there’s one on each face of the house) could not be opened.

About three years ago, those in charge of the National Trust for Historic Preservation site oversaw a temporary stabilization in the troubled corner, working with Brooklyn, N.Y.-based Evergreene Architectural Arts.

“It sagged about three inches in that corner,” Brendan Tobin, senior buildings & grounds manager at the Glass House said Tuesday afternoon, standing near Johnson’s building on the Ponus Ridge site.

“They stabilized it by putting some lag bolts and washers in place so it would not further sag, and they gave us basically three proposals to restore or preserve the ceiling.” 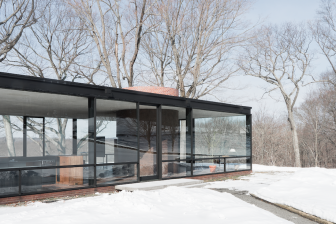 Glass House officials reviewed those proposals (more on them below) and settled on one so that work could start days after the 2017 season ended on Nov. 30.

The project costs $225,000 — a figure that includes $183,000 for the ceiling work itself plus costs for protecting part of the collection in place and removing and storing other pieces. The figure reflects the high cost of doing any type of capital work at the historic site.

“The Glass House is a site of the National Trust for Historic Preservation and this is part of our obligation, to maintain and preserve it,” Executive Director Greg Sages said.

In a perfect timeline, Tobin said — “that is, without finding any issues when they pull the ceiling down” — the project will be completed by early February.

That’s well ahead of the May 1 opening for the 2018 season. Visitors to the Glass House may experience a cooler interior during summer tours next year, as the breeze from an open door is the only way to get new air into it — just as it had been in Johnson’s day.

Christa Carr, communications director for the Glass House, noted that the local branch of Bank of America generously donated a $40,000 grant toward the project. Another $62,000 came in through a grant from the Connecticut Department of Economic and Community Development, Sages said.

Tobin said one proposal from Evergreene on restoring or preserving the plaster ceiling was to reattach its sagging southwestern portion. Yet there was a risk that the plaster would crack, exposing holes from screws that would have to be patched, creating a “kind of Polka-dotted grid.”

The second proposal was to cut out a one-third section of the plaster ceiling, replace it and clean the remaining piece. Yet Evergreene couldn’t guarantee that the cleaning would pan out, since salts and other chemicals could leech out of the plaster and create stains.

So, “we thought it was best to replace it in entirety,” Tobin said.

“The current system is the three-coat plaster system — scratch coat, mid-coat and top coat — it’s never been painted. And basically what it is, is plaster on regular steel wire lath, to one-by-one nailers that go up into the roof joists. Standard nails were used —not ring nails or screws, obviously. So gravity and just leaks and stuff over time just made the ceiling sag.”

Sages noted that the plaster “will be expertly matched” with what was originally installed.

Philip Johnson, a titan in the field of architecture in the 20thCentury, was born in Cleveland in 1906. He would graduate from the Harvard Graduate School of Design in 1943 and go on to design some of the nation’s great architectural landmarks. Most notable among those was the Glass House, his own private residence on which he broke ground in 1948 and completed the following year.

In 1986, the Glass House site was handed over to the National Trust for Historic Preservation. He died in 2005 at age 98.

One of the very first preservation projects that was done at the Glass House was replacing its hot coal tar pitch roof, in very early 2007, months before it opened to the public for the first time.

The Glass House itself remains the centerpiece of the 49-acre campus and 14 structures that dot it.

As capital needs arise, Sages and his team restrict or close access to those structures for tours (the only way to visit the Glass House site is during tour season, through its Elm Street visitors’ center). The Sculpture Gallery opened for the 2016 season after a $2 million project there.

The highest-priority project now is 1949-built Brick House, complement to the Glass House and finished just a few months before it.

“We know what needs to be done and it ‘s a matter of getting the funds in,” Sages said.