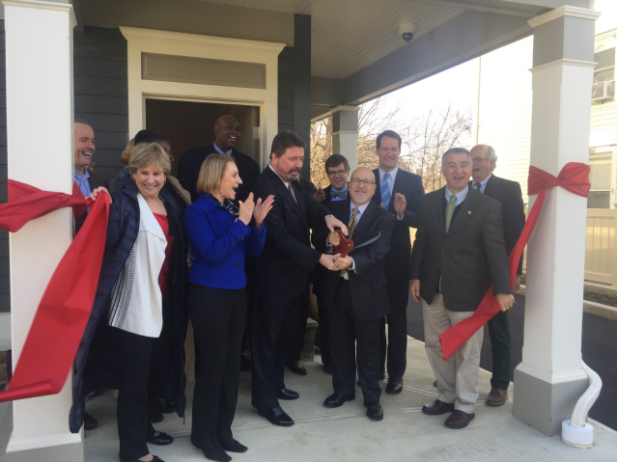 At the opening ceremony for Gateway House, a housing program in Stamford for the homeless in Fairfield County.

Gateway House in Stamford is one of several similar properties run by Pacific House which give long-term housing to the homeless, and the agency expects to open two more in the near future.

A total of 170 applications were submitted for the 16 available beds at Gateway House. Pacific House helps homeless people from Stamford, Greenwich, New Canaan and Darien and the rest of Fairfield County.

State Housing Commissioner Evonne Klein of Darien spoke at the event, as did U.S. Rep. Jim Himes, a Greenwich Democrat; and state Sen. Carlo Leone, a Democrat who represents Stamford and part of Darien.

Here’s the announcement from the organization: 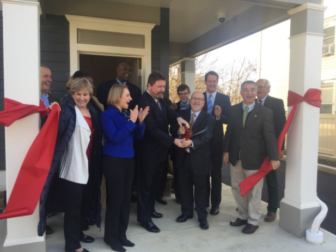 At the opening ceremony for Gateway House, a housing program in Stamford for the homeless in Fairfield County.

“Five years ago Pacific House, our Board of Directors and staff crafted a vision for ending chronic homelessness in our community,” continued Pagan.  “Today, this vision is a reality as we celebrate the opening of Gateway. We’re very happy to show the results of our partners’ investment today and we thank them for trusting in us.”

“This was a real collaboration between federal government, state and town. Even with financial challenges, these kind of things are happening,” said Congressman Jim Himes.  “When someone is making eight to twelve dollars an hour, we now have a platform from which they can ascend the ladder.  For these 16 people it is arguably their first access to the American Dream.” 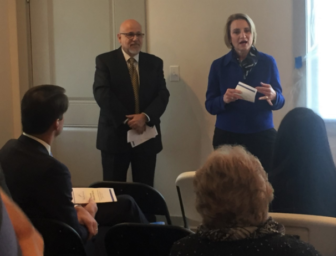 A collaboration indeed.  Seed money for the project was provided by the City of Stamford Office of Community Development and by the First Presbyterian Church of Greenwich.

Three more projects are in the works: two in Stamford, and a property in Norwalk which will address homelessness in young adults.  Each building will offer housing for homeless individuals who cannot afford to live in affordable housing.

“We’re fortunate to have created a system to rapidly house people,” said state Department of Housing Commissioner Evonne Klein.  “Connecticut is the first in the nation to end chronic veteran’s homelessness and we’re well on our way to ending chronic homelessness by the end of the year.  We have funding commitments for 5,200 units across the state and over $1 billion commitment in affordable housing across the state.  It’s unprecedented.”

“This is the right kind of thing we should be doing, investing in people so they can invest in themselves,” said State Senator Carlo Leone.  “Sixteen people will have a nice new start to get their lives back on track and contribute to society,” added Klein.

“When you think about it,” said Tim Beeble, community development director (retired), “while 16 individuals will have a place to live, as you look over the life history of the building, we’re really helping 120-150 people.”

Since 1982 the organization has served 1 million meals, provided 800,000 bed-nights, secured housing for 1,500 people, and found employment for 3,000 clients. Pacific House is an innovator in transforming lives and helping clients become more self-sufficient.  To learn more, or to make a donation, visit www.PacificHouse.org or call 203-406-0017.