Janusz Lech Madej, 84, husband of the late Wieslawa “Vickie” Madej, passed away on Nov. 12, 2020 at his home in Fresno, California. He was a former longtime resident of Darien. 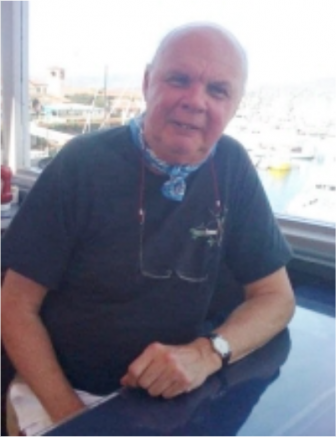 Janusz Madej, 84, passed away on Nov. 12. His funeral and burial will be private.

He was born August 24, 1936 in Warsaw, Poland, and was the only child of the late Tadeusz and Maria (Nowicka) Madej.

He grew up during World War II. Life during the war was arduous and dangerous and times were lean. One night a Russian bomb took down one wall of his family’s apartment while they slept, but miraculously, no one was injured in the blast.

After the war, Janusz split his time between the Warsaw apartment and a country house in Bielsk Podlaski where he would hunt wild boar with his great grandfather, grandfather and uncle.

At a young age, Janusz demonstrated great gifts in math and science — and was encouraged to attend the prestigious Polytechnic University in Warsaw where he earned his master’s degree by creating a visionary design of the city’s mass transportation system. His favorite activity during his university years was sailing with his friends in the Masurian lakes.

His accomplishments at the University garnered the attention of French diplomats and he was invited to be the first Polish MBA student at the premier international business school — INSEAD in Fontainebleau, France — just outside of Paris. He was equally adept in the classroom, on the soccer field — and at enjoying French bohemian life at the wine and cheese bar.

After graduating, he was offered a job in Manhattan at the Diebold Group, a boutique consulting company — which was indeed a golden ticket for any chap from the Eastern Bloc. Like BB King, he arrived in a big city with one suit and five bucks in his pocket. He and his new bride started their life together in NYC, and shortly thereafter his son was born.

The next few years saw Janusz’s career take off, and it involved his family moving to Germany and then to Michigan as a senior IT executive with the Clark Equipment Company.

Even though Janusz had to travel a lot for work, he was always there to root for his son on weekends as he raced motocross. Together with his son, he learned skiing (with yearly trips to Vail, where the ski run “Forever” became his favorite), golf, and scuba diving, and he taught his son sailing, shooting and fishing.

Then work brought Janusz back to the East Coast, and his family settled in Darien, where he lived for 30 years. Janusz worked for CSC Index, a Boston management consulting firm, where he managed international projects in South America and Singapore.

After his wife passed away, Janusz rekindled his love of travel, taking many exotic trips and cruises. He was like that Johnny Cash song, “I’ve been everywhere, man!”

It was on one of these cruises that he heard about a special place on the coast of California — Ventura. One visit and he was hooked on its beauty and charm. Janusz got a new zest for life on the West Coast and enjoyed his last years there with his close friends in Ventura and Fresno, California. He was a member of the Ventura Yacht Club.

Janusz is survived by his son, Piotr Madej (Kristen) of Darien; and his two nephews, Robert Krolak of Ontario, Canada, and Artur Zlotnicki of Warsaw.

Due to the ongoing COVID-19 health concerns, there will be a private family funeral Mass and burial. Donations in his memory may be made to the American Heart Association.