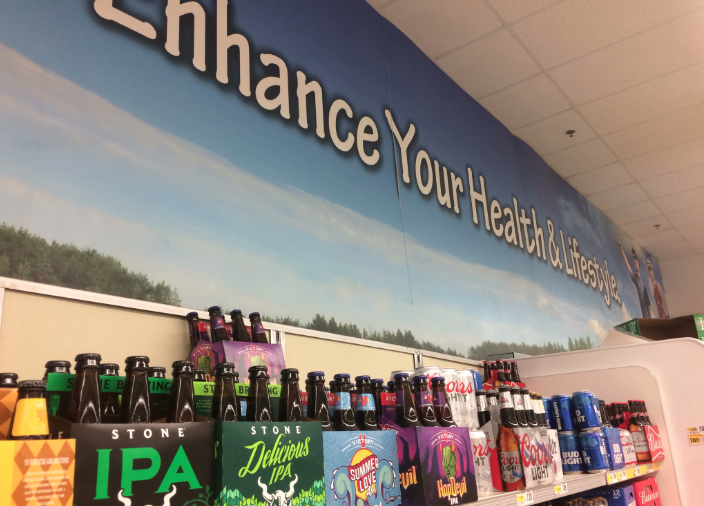 When an area supermarket distributed products from its organic food section to shelves around the store, beer went on the shelves under the "Enhance Your Health and Wellbeing" sign, which just looked ... interesting.

Now that 2019 has officially begun, many are resolving to leave old drinking patterns behind — at least for the month of January.

After indulging in food and drink during the holiday season, millions of people worldwide support the chance to remain sober with their friends for 31 days.

— If you have a drinking problem, “Dry January” is NOT for you, as the article says further down. This article is submitted by Mountainside Treatment Center, which has multiple locations, including one in Wilton. Opinions expressed here are from Mountainside.

According to a 2018 study by the University of Sussex, 67 percent of Dry January participants felt more energized and 70 percent found that their general health improved after one month of sobriety. Those surveyed also slept more soundly and experienced improved concentration, clearer skin, and weight loss.

Aside from the physical health benefits of Dry January, refraining from drinking for just one month can also have a profound impact on participants’ emotional health.

The majority of survey respondents felt a greater sense of achievement, reevaluated the way they thought about alcohol, and gained deeper insight into when and why they consume alcohol. For many, Dry January creates the momentum to achieve physical and mental wellness throughout the year.

“Dry January isn’t the right fit for everyone, but for moderate drinkers, cutting back on alcohol for just one month can help build healthier habits in the long term,” says Amy Sedgwick, director of Clinical Operations at Mountainside treatment center.

“People notice the changes in their physical and mental health and they feel motivated to continue making positive lifestyle choices.” The University of Sussex researchers indeed found that individuals who took part in Dry January were still drinking less seven months later.

While moderate drinkers can reap multiple health benefits from Dry January, people who engage in binge drinking — defined by the CDC as drinking five or more drinks for men and four or more drinks for women over two hours — should exercise caution, as they may encounter uncomfortable withdrawal symptoms such as nausea, hallucinations, and even seizures if they abruptly quit alcohol.

Those struggling with alcoholism are especially advised to undergo medical detox under the supervision of professionals who can monitor their safety and progress.

“People suffering from alcoholism can endanger themselves if they try Dry January on their own because a sudden stop in drinking can cause alcohol withdrawal symptoms that can vary from tremors, nausea, and chills to more severe symptoms including delirium tremors.  For acute alcoholics, a sudden stop in alcohol consumption can be fatal,” says Sedgwick.

“Medical detox reduces the risk of health complications and offers the best chance at a lasting recovery.”

When an area supermarket distributed products from its organic food section to shelves around the store, beer went on the shelves under the “Enhance Your Health & Lifestyle” sign.

Mountainside provides drug and alcohol addiction treatment programs. Our Integrative Care Model provides a set of treatment and care offerings coordinated by a multidisciplinary treatment team to fit the needs and interests of each client.

We partner with each client and the client’s family and healthcare professionals in developing and executing individualized treatment plans that promote long-term sobriety.