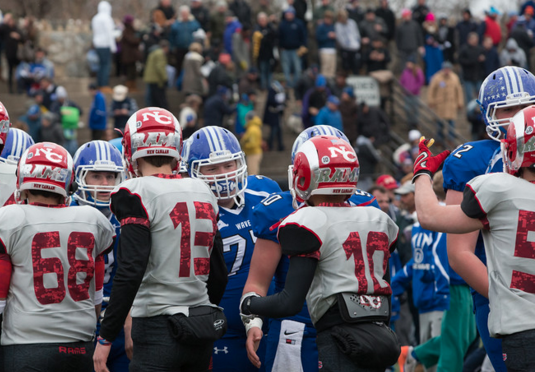 Darien High School has announced where and when tickets may be bought for the 2016 Turkey Bowl between Darien and New Canaan on Thanksgiving Day (Nov. 24).

Sales start for students in the morning on Nov. 21 and for the public in the afternoon at Darien Public Schools headquarters, 35 Leroy Ave.

Pre-sale Tickets Only; No Ticket Sales at Gate

Because there is limited seating capacity at Dunning Stadium, Darien has been allotted 1600 tickets for the game. As a reference point, Darien presold 2500 tickets to last year’s Turkey Bowl game. We estimate an additional 1500 to 2000 Darien fans bought tickets at the gate.

To maintain a safe and orderly event, tickets will not be sold the day of the game by either school, or at the gate. Both high schools will pre-sell tickets beginning on Monday, Nov. 21.

Stadium gates will open Thanksgiving morning at 8:45am for those who have already purchased pre-sale tickets. Seating will be on a first come, first serve basis. Standing room has been factored into the total number of tickets being sold. Those without tickets will not be admitted. For those who wish to watch the game on the internet, the game will be broadcast live for free on the HAN Network.

No food or drinks, backpacks or bags will be allowed in the stadium the day of the game. There will no re-entry to the stadium after exiting. There is no provision for lost tickets.

All Tickets are $10. No passes will be honored. Every person will need a ticket to enter the stadium.

**There is an expectation that tickets will sell out quickly.

A notice will be posted on the DHS website when tickets are no longer available.

Tickets will cost $10, students will need to buy one—no passes or student IDs will be honored—and can be purchased in the NCHS gym foyer from 12 to 5 p.m. on Nov. 21 and 22, and 12 to 4 p.m. on Nov. 23, according to an announcement released by the school’s athletic director.

“This year’s game is being hosted by New Canaan High School and will take place in Dunning Stadium, which has significantly less capacity than Boyle Stadium,” according to the announcement.

“To maintain a safe and orderly event, we will not be selling tickets the day of the game. Each high school will pre-sell tickets beginning on Monday, Nov. 21. Stadium gates will open Thanksgiving morning at 8:45 a.m. Seating will be on a first come, first serve basis. We have factored in standing room to the total number of tickets being sold. Everyone with a ticket will be admitted to the game.” 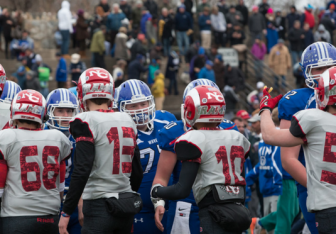 Officials have set a maximum of 10 tickets per visit.

For the past two years, the Blue Wave has captured the coveted Turkey Bowl crown, winning the FCIAC championship in the process. New Canaan and Darien remain the only unbeaten teams in the conference this season, after notching wins Friday night over Fairfield Ludlowe and Staples, respectively.

According to the announcement, on-site parking for this year’s Turkey Bowl will be limited.

“Off-site parking will be available at Saxe Middle School, South Elementary School, and Waveny Park,” the announcement said. “No food, drink, backpacks or bags will be allowed in the stadium the day of the game. There will also be no re-entry to the stadium. There is no provision for lost tickets.”