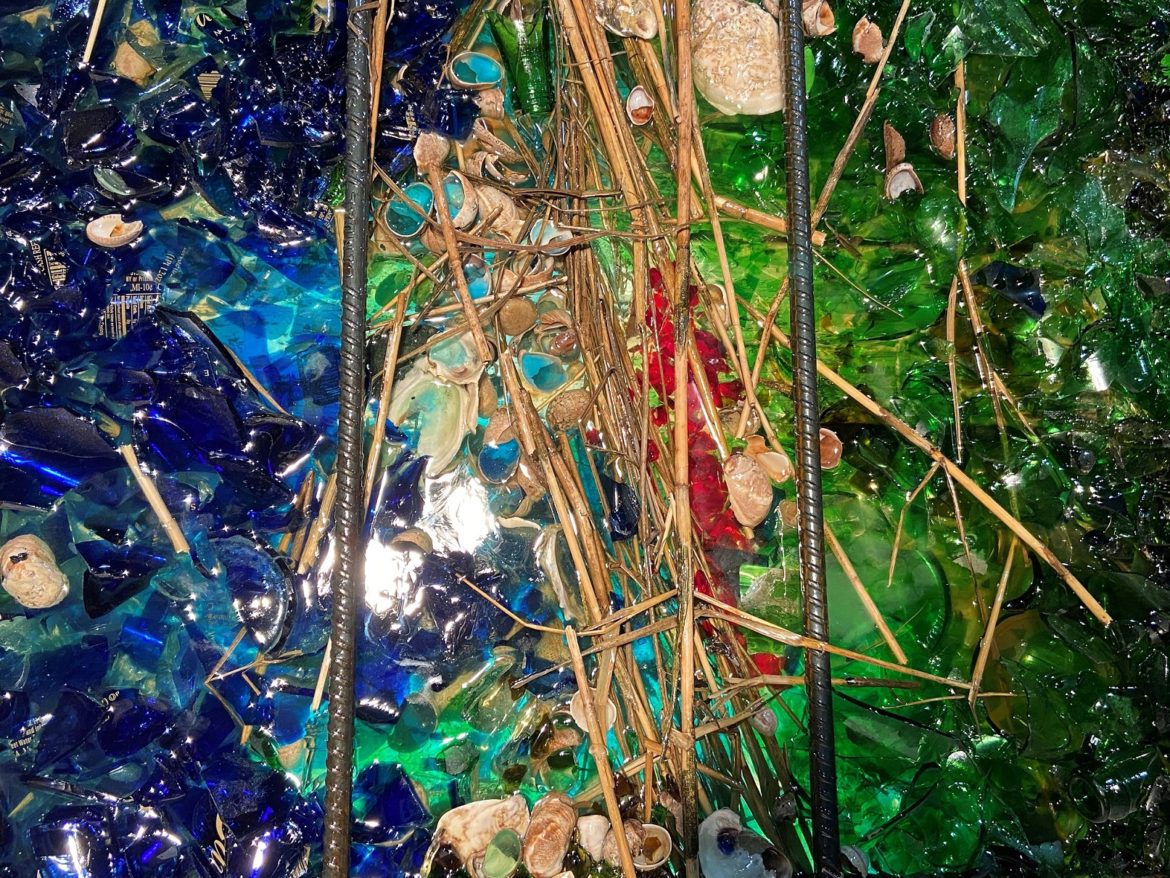 A new exhibit with connections to local history is now open at the Housatonic Museum of art. Entitled Artist Rachel Owens’ exhibit, “The Hypogean Tip,” explores both Bridgeport’s and our larger nation’s past.

— an announcement from the Housatonic Museum of Art

The show, which runs through March 21, is comprised of sculptures rendered in various materials, including large-scale casts in broken glass from the porch of the home of Mary Freeman (listed on the National Register of Historic Places) and works cast in coal and marble dust that invoke P.T. Barnum’s specter as well as his adverse impact. 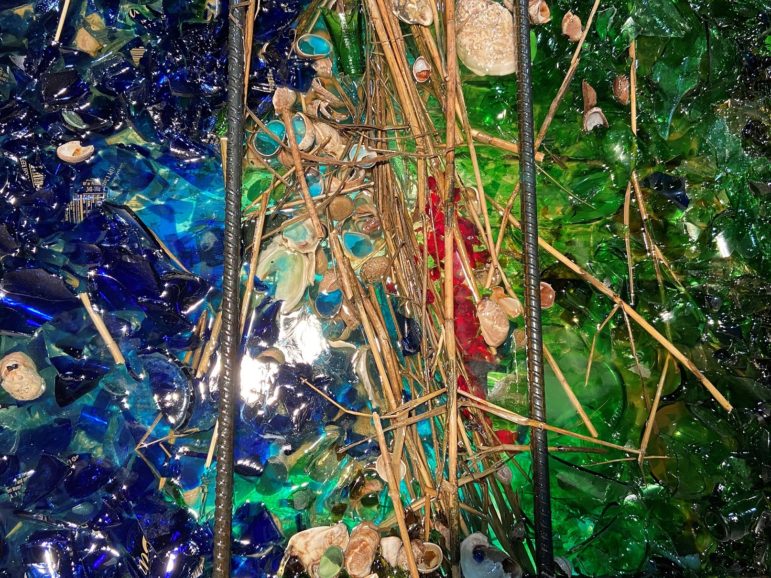 Focusing on the relationship between what was before and what is to come, Owens’ work weaves together, both literally and figuratively, the surface and substrata of the ground to reveal its structure, material, and history. 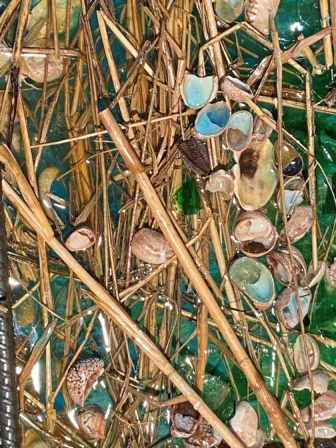 The porch sculptures, part of an ongoing project entitled Life on the Other Side of a Cracked Glass Ceiling, are a platform for visitors to climb and stand on while reimagining the site and the accounts it holds.

This portion of the exhibit allows us to reimagine the radical past of the Freeman sisters and offers the potential for recreation.

Industrialization and capitalistic forces quickly swept away most of a bourgeoning community and have caused generations of both ecological and human collateral in the area. In the back gallery, a stovepipe hat becomes a smokestack, “shellscapes” cast from exoskeletons found along Long Beach and the Great Meadows Marsh, and an amphibious figure focus on the underlying causes for the decimation of Little Liberia.

The word Hypogean comes from the Greek words hypo (under) and Gaia (earth) together meaning underground. From the sea bed to coal-burning to stepping above and re-experiencing our community, the show is both a tip, as in a bit of information and a tip, as in toppling, of our expectations of what is above and what is below. 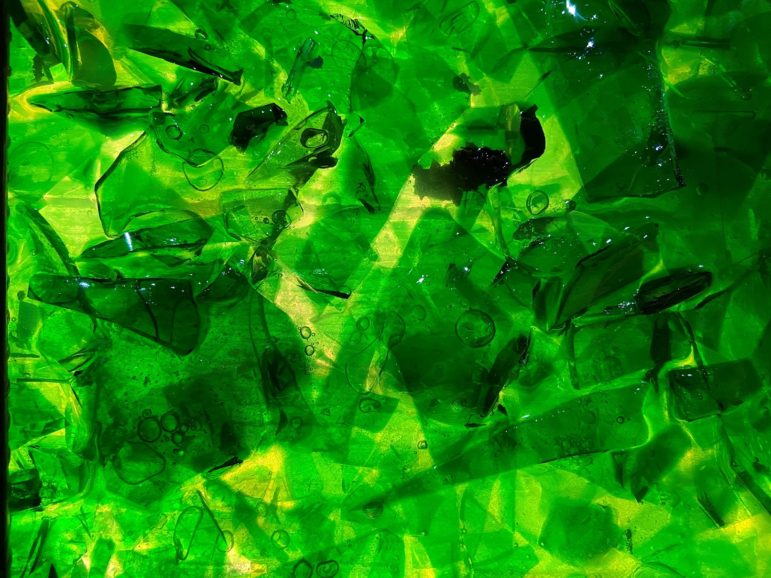 “Imprints of porch floors, grasses, shells and leaves embedded within richly-colored cast glass document the cultural geography of Bridgeport’s South End,” said Robbin Zella, director of Housatonic Museum of Art, “enticing us to learn about the people and politics of everyday life in Little Liberia.”

Programming With the Exhibit

Programming to accompany the exhibition will also take place:

With varied natural and urban instrumentation, Laura Ortman’s music is known for compositions that alternate lyrical intimacy with layered improvisation, often experimenting with four-track tapes and remixing her own audio catalogue in an evolving dialogue with herself. On Thursday, February 20, she will engage the scaffolded sculptures of Owens’ exhibit by playing violin as well as employing native instruments and digital effects.

Utilizing two automatic slide projectors Workman will perform a series of choreographed movements that respond to the projected images of the following housing projects, many of which have since been demolished in the city of Bridgeport: Father Panik Village, The Greene Houses, Marina Village, and P.T. Barnum Apartments. Following the performed movements she will transition to being seated on a scaffold and invite four selected guests to recall memories of living in these housing projects.

Rachel Owens received her MFA from The School of the Art Institute of Chicago in 1999 and lives and works in Brooklyn, NY. 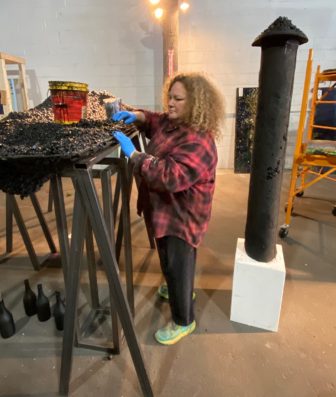 Rachel Owens’ new exhibit will explore both Bridgeport’s and our larger nation’s past. “The Hypogean Tip” runs through March 21 at the Housatonic Museum of Art.

Through a feminist lens her work focuses on issues of hierarchical social conditions, consumption of the environment and the points where these things intersect. Taking various forms, she uses materials that once existed with a specific function, reassigning them within a different context and creates new meaning.

She is assistant professor of art and design at SUNY Purchase College and chair of the Sculpture Department..

Owens’ work has been included in exhibitions both in the U.S. and internationally including The X Krasnoyarsk Biennial, RU; Franco Soffiantino Contemporary, IT;  Austrian Cultural Forum, New York; The Frist Museum of Art in Tennessee;  Socrates Sculpture Park, LIC; New Museum Window, New York and ZieherSmith Gallery in New York, among others.

She has been reviewed in the New York Times, New Yorker, Sculpture Magazine and Hyperallergic and has received grants from the Pollock-Krasner, Joan Mitchell, and Harpo Foundations.

Ortman’s notable performances include venues at the The National Museum of the American Indian, the Museum of Modern Art, The Kitchen, MoMA P.S. 1, Centre Pompidou, Musée d’Art Contemporain de Montréal, SF MoMA, CBGB’s, St. Marks Church, Dia Art Foundation, amongst countless other established and DIY venues in the US, Canada and Western Europe.

Lachell Workman (born 1989, in Stratford) is an interdisciplinary artist based in New York and Connecticut. She received her BFA in photography from the University of Connecticut in 2011, and her MFA from SUNY Purchase College in 2015. Her work consists of photographic and sculptural installations that challenge hegemonic historical discourses.

Her practice considers ritualistic practices of mourning and memorialization within inner-city spaces as a site for radical visibility. Through deconstructing ephemera such as the family snapshots, t-shirts and infrastructural materials, she works to disrupt narratives of grief from a disproportionate trauma weighted in the black body.

Her recent exhibitions include THREE, At We Buy Gold (2017), Where We Land, The Union for Contemporary Art, Queering Space at Yale University (2016), and Dineo Seshee Bopape, “Untitled (of the occult instability) [feelings]”, at the Palais de Tokyo, Paris, France (2016). She has participated in residencies at the Skowhegan School of Painting and Sculpture, The Shandaken Project at Storm King Art Center, Ox-Bow School of Art and the Vermont Studio Center.

About the Housatonic Museum of Art

The Housatonic Museum of Art is located on the Housatonic Community College campus, 900 Lafayette Blvd. in Bridgeport. It is home to one of the premier college art collections in the United States. The museum’s collection offers the opportunity to view works that span the history of art from the ancient to the contemporary and is on continuous display throughout the 300,000 square foot facility.