At its recent board meeting, Nancy Herling was named director of Darien EMS-Post 53, replacing Ron Hammer who is retiring from the role after six years.

As director, Herling is responsible for the operations of the ambulance service, including personnel, training, fundraising, operations and community outreach. 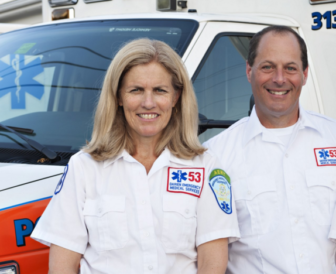 Nancy Herling, the new director of Darien EMS-Post 53, and Ron Hammer, whom she’s succeeded in the post. (photo contributed)

Herling is the eighth person to serve as director in Post’s 46-year history and the first who also served as a member of Post as a student and is the parent of a former Postie.

“We are so pleased that Nancy has agreed to take on this role as director of Post 53. She brings many years of valuable experience with Post to the job — understanding all aspects the organizations and its role in the community,” said Mike Murray, the Post’s board chairman. “

As Post 53 continues to evolve, we are confident that Nancy will be a strong leader and liaison with the community.”  She will have the support of Assistant Directors Chris Coleman and Dale O’Brien.

“We are so grateful to Ron for his tremendous commitment and leadership of Post over the last 6 years,” continued Murray. “He has been a steadfast supporter of the highest standards and a true leader and mentor for all Post 53 members.”

Herling, a life-long resident of Darien, served as a member of Post from 1973-77.  She joined Post 53 again in 2007 and is now a certified AEMT and an EMS instructor & CPR instructor; she has served as advisor to programs and assistant director in those eight years.

— an announcement from Darien EMS-Post 53

In addition to her work at Post, Herling has led several school PTOs in town; is a former director of the Senior Center; and former president of A Better Chance and At Home in Darien; an elder at Noroton Presbyterian Church and has served on the Human Services Commission for more than 20 years. With her husband, Mike Herling, she has raised three sons in Darien.

And when you’ve got an event — from a tag sale to a school fair — post it on our events calendar.

The members of Post 53 are committed to achieving and maintaining the highest level of training and skill in providing pre-hospital care and transport to the citizens of Darien.

Post 53 is recognized locally and nationally as one of the finest emergency ambulance services in the United States, for its consistently high quality of pre-hospital emergency care.