Two motor vehicles were entered sometime overnight in different parts of town, owners discovered Friday and Sunday — the first such reports in about two and a half months, Police Chief Raymond Osborne said.

The vehicles, of course, were unlocked. Locked vehicles are hardly ever entered overnight in residential neighborhoods.

“We went over two and a half months without a motor vehicle burglary,” Osborne told the Police Commission on Tuesday. “So, we had a good streak […] now we’ve only had a couple of them, and hopefully this is an anomaly.

“We’re doing our best to keep an eye on that,” he said. “We’re very encouraged that we haven’t seen too many of them. People hopefully, are complying and keeping their vehicles locked up at night. We’ll monitoring that very closely.” 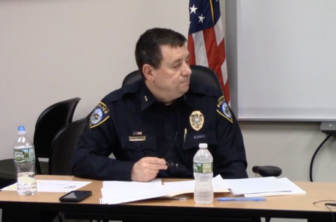 Overnight from Thursday to Friday, a 2005 Saab (police didn’t say what model or type of vehicle) was entered at 12 Plymouth Road. The owner, who called police at 9:08 a.m., said she found the glove compartment open and its contents disturbed. Nothing appeared to be missing, she told police.

At 18 Christie Hill Road, a 2012 Volkswagen GTI was entered sometime overnight from Saturday to Sunday, the owner told police. Again, the glove box was open, its contents disturbed and it seemed nothing was taken. The owner reported the incident at 5:06 p.m., Sunday.

The two addresses are nowhere near each other: about four miles away.

At a department heads meeting with the Board of Selectmen on April 23, Osborne said the department is looking into a software program developed by Rutgers University that attempts to map out higher crime areas of a community.

Osborne said the department is interested in seeing if it could be used to determine where nighttime patrols might concentrate in the most efficient way possible to better prevent motor vehicle entries and burglaries, in particular.

The state’s juvenile justice system has been too lax with teenagers, who commit most of the motor vehicle burglaries in Darien and elsewhere, Osborne said.

“Even when we do catch these individuals, they’re juveniles. […] When they are caught now, it’s kind of a revolving door in the Juvenile Court system,” he said, “and nothing’s happening to them — which is a big part of the problem.”

For at least the more severe cases, locking up juveniles repeatedly caught trying to enter cars would be a much better solution, Osborne said.

Darien police also work with police in other towns on investigations into motor vehicle entries, burglaries and thefts, he said.

Asked by First Selectman Jayme Stevenson whether or not a Juvenile Review Board that the town has for other juvenile offenders would be helpful, Osborne said he doubted it would, particularly because those boards aren’t set up to handle more severe cases, including felonies, that are sometimes involved in these situations.

On the back of Darien Police patrol cars: “Lock your car. every time. Everywhere.”