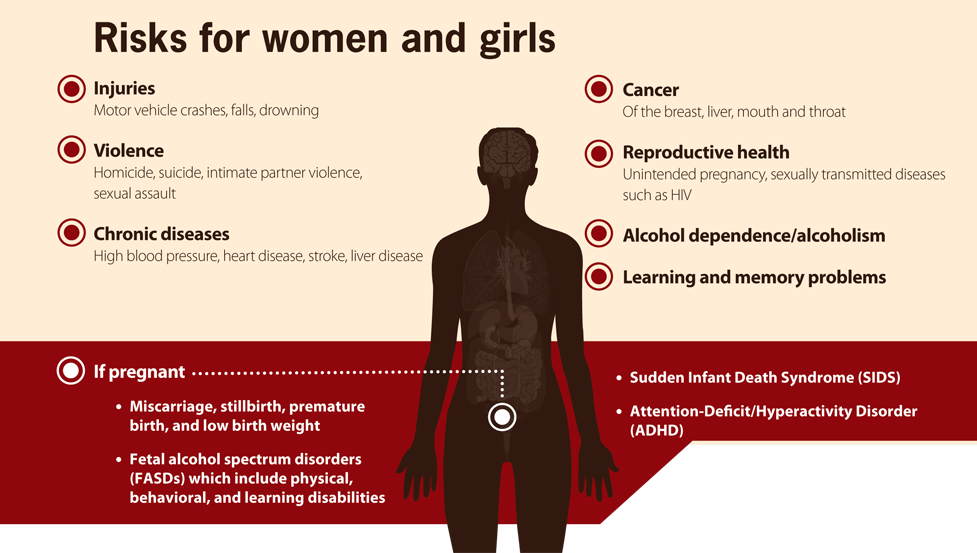 Infographic from the Centers for Disease Control

Risks for women and girls from abusing alcohol.

Women have made many economic and social advancements, but another gender gap is closing: drinking rates among men and women.

Researchers believe that rates of female alcohol consumption — and alcoholism — have escalated due to shifting cultural messages about women’s drinking, along with the growing number of women turning to alcohol to alleviate stress.

— an article from Mountainside Treatment Centers (illustrations added by Darienite.com)

A 2017 study from the journal JAMA Psychiatry found that drinking rates increased significantly among the general public from 2002 to 2013, and the frequency of high-risk drinking among women in particular spiked by 58 percent. More alarmingly, the study revealed that rates of alcoholism among women rose by 84 percent during the same period. 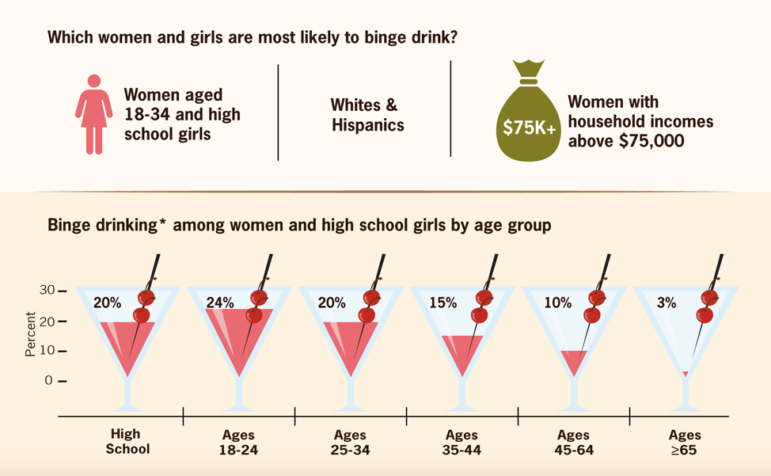 Infographic from Centers for Disease Control

The rise in women’s drinking over the past two decades is not a coincidence. Alcohol use disorders are often connected to stress and co-occurring disorders. Trauma and mood disorders — such as anxiety and depression — disproportionally impact women, according to the National Institute of Mental Health. As a result, women commonly self-medicate with alcohol to manage symptoms of underlying mental health conditions.

To make matters worse, alcohol campaigns have increasingly geared their advertising toward female audiences. Some liquor ads have signaled to female consumers that drinking can be a sign of feminine strength, such as a “Jane Walker” whisky campaign that was launched by the alcohol company Diageo in 2018. Other ads communicate that alcohol can help women cope more effectively with the pressures of marriage or motherhood.

See also: Letter: Come to the April 10 Discussion on Women and Alcohol (April 1)

“Some media companies rely on the perception that alcohol can transform women into better, more glamourous versions of themselves or can give them the ultimate sense of relief from the realities of their busy lives: stressful careers, raising children, and managing a household,” says Jana Wu, clinician at Mountainside treatment center. “But the reality is, most women feel more empowered when they find a sense of purposefulness without relying on alcohol to instill confidence and meaningful connections.”

Ads that portray drinking as harmless are especially concerning because women experience the adverse effects of alcohol more rapidly. Alcohol tends to impact women more immediately because they generally weigh less than men and carry less water to store alcohol throughout their bodies. 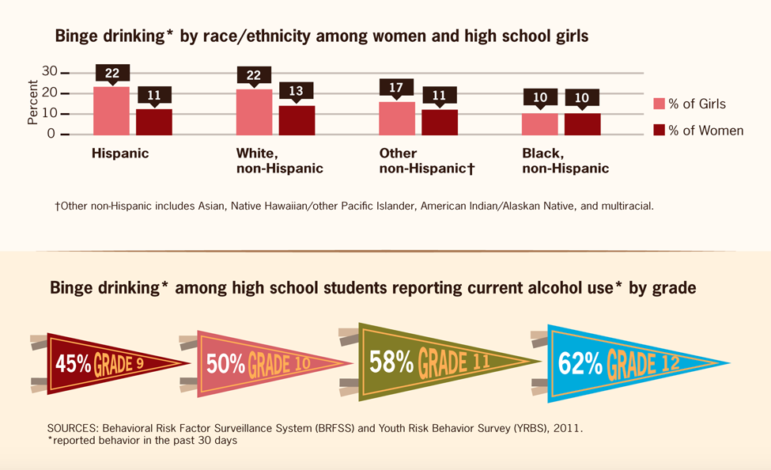 Infographic from Centers for Disease Control

Binge drinking is more prevalent in some groups of women and girls.

The National Institute on Alcohol Abuse and Alcohol (NIAAA) indicates that women also develop alcohol use disorders more quickly, even when they drink less than their male counterparts. To reduce their risk of developing alcoholism, women should avoid indulging in more than seven drinks per week, whereas men are advised to consume no more than 14 drinks per week.

Woman who exceed these limits are more likely to develop certain health issues than men, including heart disease and liver damage, according to the NIAAA. Women who drink once per day also face a greater likelihood of developing breast cancer than those who abstain from drinking.

Expectant mothers who consume even small amounts of alcohol may encounter severe labor complications, including miscarriage or developmental risks to the fetus. 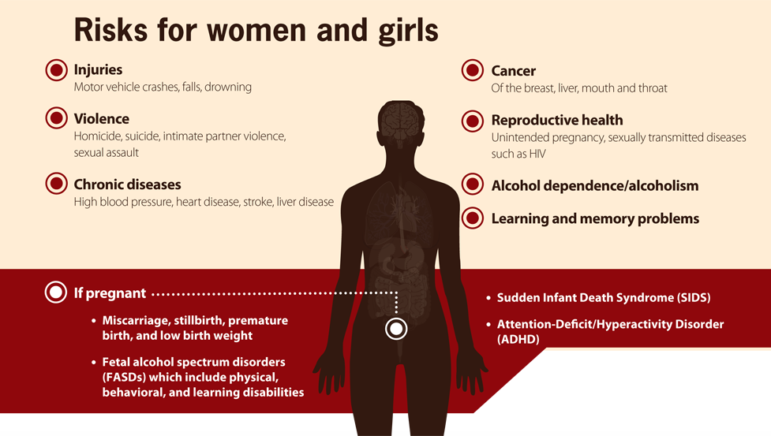 Infographic from the Centers for Disease Control

Risks for women and girls from abusing alcohol.

Despite the higher stakes for women who participate in problem drinking, few women seek treatment for alcoholism. 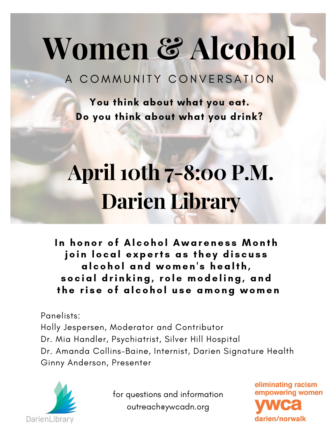 An event is coming on the same subject.

In a study of 66,053 individuals who were diagnosed with alcohol-related cirrhosis between 2009 and 2016, the Research Society on Alcoholism discovered that only ten percent of those surveyed attended treatment. Women were even less likely than men to address their problematic drinking through an inpatient or outpatient treatment program.

“While it’s true that women have more choices in society today, women never choose to develop alcohol use disorders. They still face many barriers to treatment, and many are so busy with their obligations at home and work that they do not prioritize their own health and self-care,” says Wu.

“Instead of normalizing the idea of women drinking for relief from their busy lives, we should focus on making sure women have access to the treatment they need. When women make empowered decisions for themselves and utilize techniques for coping with stress, they can enjoy more full and authentic lives in recovery.”

Mountainside is nationally recognized for the effectiveness of its drug and alcohol addiction treatment programs. Our Integrative Care Model provides a comprehensive set of treatment and care offerings coordinated by a multidisciplinary treatment team to best fit the unique needs and interests of each client.

We are lauded for our ability to partner with each client and the client’s family and healthcare professionals in developing and executing individualized treatment plans that promote long-term sobriety. Learn more about Mountainside at mountainside.com.

2 thoughts on “More Drinking, Alcoholism Among Women Now, and They Face Particular Risks”