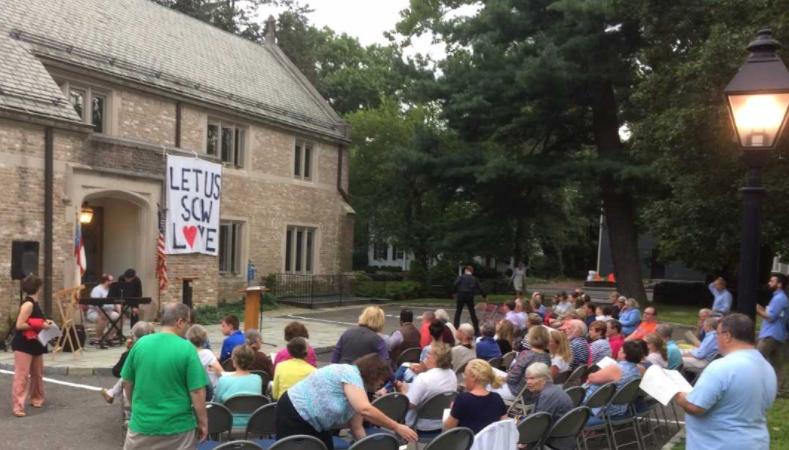 The "Service of Unity and Community" Monday night in the front lawn and driveway of St. Luke's Church.

God’s message of love for all nationalities — a message repeatedly seen in the Bible — is a powerful rebuke to bigoted hatred of others, Christian preachers from different Darien Churches told an audience Monday at a service held to counter messages coming out of Charlottesville, Va. this past weekend. 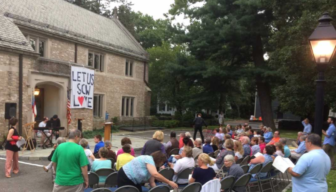 The “Service of Unity and Community” Monday night in the front lawn and driveway of St. Luke’s Church.

About 65 people attended the special “Service of Unity and Community” held in the front of St. Luke’s Church early Monday evening.

“We’re here tonight for love and for the radical embrace of God and Christ that’s able to break down every barrier,” the Rev. David Anderson, pastor of St. Luke’s, told the gathering. “As St. Paul said in Galatians and in 2 Peter: Jew or Greek, bond or free, male or female, in Christ all the divisions we make between people are broken down.”

Anderson said that on Sunday he asked the congregation “if they had ideas of what we could do […] to push back against the kind of bigotry and hatred and racism that we were seeing so powerfully and uncomfortably coming out of Charlottesville.” Several ideas came up, including one in an email from Deacon Intern Don Burr, who suggested having the service. 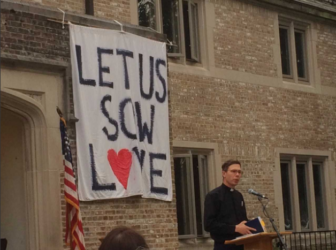 The Rev. Daniel Lennox speaking at the service.

The service had music, Bible readings and short talks from ministers. The Rev. Daniel Lennox, spoke about Jonathan Daniels, an Episcopal seminarian who participated in Civil Rights work in the South in 1965. That year he lost his life when he put himself between a teenage protestor, Ruby Sales, and an angry man with a gun, who then shot Daniels. Daniels is now considered a martyr by the Episcopal Church, and Monday is designated by the church as his day of remembrance.

The Rev. John Seiders of Noroton Presbyterian Church read a passage from Revelation 7:9-12. Another of the readings, Isaiah 56:1-8, included the words:

And foreigners who bind themselves to the Lord […]

these I will bring to my holy mountain
and give them joy in my house of prayer.
Their burnt offerings and sacrifices
will be accepted on my altar;
for my house will be called
a house of prayer for all nations.

The Rev. George Kovoor, rector of St. Paul’s Church in Darien and a personal chaplain to Queen Elizabeth II, gave the homily. A native of India, he pointed out that Christianity in that country goes back to the time of St. Thomas, one of the Apostles, who is believed to have brought the Gospel to India.

“So first of all welcome you to the global family of Jesus Christ, the world’s biggest family,” he said. “Long before the Christian tradition came to many parts of Europe, let alone the United States, the Church of Jesus Christ was both alive and doing well. The Church in India today has over 70 million Christians. […] The face of the global Christian is not white.” 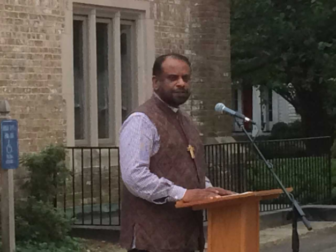 The vision in the Bible reading from Isaiah is “a cosmic vision of the universal church where foreigners are welcome,” Kovoor said. He pointed out that Abraham in the Old Testament was from Iraq when God chose him to lead.

Kovoor repeatedly said, in various ways, that the answer to bigoted hatred of other ethnicities is God’s word.

“What we saw in Charlottesville is one of those graphic images of the wilderness — man lost and confused and making poor judgments,” Kovoor said. “The vision of God for a civil and sane society is that there is generosity and hospitality at the very heart of God’s being. All are welcome, all are invited, all are included.” 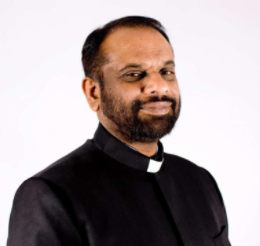 Huddling in our own ethnic groups or our individual churches instead of working with others is wrong, he said. “We’re all tribal in our instincts. We need to go into the public forum and speak, speak bipartisan politics. This is much more than any ideological or philosophical silo that we live in. […]

“The Church is called to be a distinct community that is a radical alternative to all of the ideologies of the world. […] We stand independent and we are able to make judgments We’re able to evaluate and we’re able to present a cohesive alternative to a messed up world with the Gospel of Jesus Christ and the vision of a global society.”

Kovoor urged his listeners to “engage aggressively in a society that is increasingly becoming atheistic and secular.”

The service concluded with “We Shall Overcome,” which has some lyrics particularly appropriate to the occasion Monday night that aren’t often quoted, including,

The whole wide world around, some day. […]