In recognition of National Homeless Persons Memorial Day, approximately 100 members of the community gathered together at the First Congregational Church of Stamford last night to remember those who died homeless in Stamford this year.

The nondenominational memorial service began outdoors in the cold, on the longest night of the year. 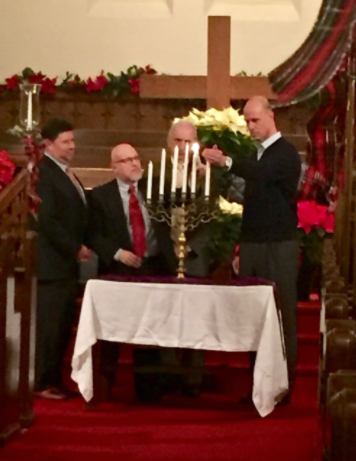 Leaders from four Stamford organizations lit candles for those who died homeless in Stamford this year at the Homeless Persons Memorial Service at at the First Congregational Church of Stamford. Left to right: Dennis O’Connor of Laurel House, Raphael Pagan Jr. of Pacific House, Ludwig Spinelli of Optimus Health Care, and Jason Shaplen of Inspirica.

“I’m 68 years old and I never thought I was going to live in the streets.  I couldn’t find a place and started feeling lonely, depressed, like nobody wants you.” said Ramirez.

“At Pacific House shelter I found life.  People really care for you there and now I’m living with hope; it seems like I could still go and be someone.  There are a lot of people that don’t have a home.  Thank you to everyone that supports this place.”

— an announcement from Pacific House

“This is a powerful service,” said the Rev. Mark Lingle, Rector at St. Francis Episcopal Church, member of the Interfaith Council of Southwestern CT, and one of the night’s organizers.  “The testimonies of those sharing their journey are extremely moving, inspiring us all to action to help those that need assistance in our community.”

“Half a million people are sleeping outside or in shelters across the country,” said Tom Mahoney, chief program officer at Inspirica.  “Our goal is to bring them inside.  While we live in the fifth most expensive housing jurisdiction in the nation, it’s possible to move from the streets to housing.”

“We started the year ending homelessness for veterans in Connecticut and we’re ending the year with putting an end to chronic homelessness in sight,” said David Rich, executive director of Supportive Housing Works.  “While our accomplishments are many, there is still much to be done.  There are still over 1,000 homeless individuals and families in the county.”