The Tiny Miracles Foundation, a Darien-based not-for-profit organization set up to help area families with premature babies, has announced Tina Tison as its new executive director.

— an announcement from The Tiny Miracles Foundation

Tison joins the foundation from The Maritime Aquarium at Norwalk, where she was director of marketing since 2016.

“I am looking forward to working with our partners and volunteers to guide and support families impacted by prematurity,” Tison said. “The Foundation has an incredibly important mission and has helped so many families since its creation.”

Ashley Dineen, president of the Foundation’s Board of Directors, said, “We’re so pleased to welcome Tina, and know that her skills, experience, energy and vision will lift the organization to new levels.”

Tison will direct the foundation’s efforts to help preemie parents in Fairfield and New Haven counties through critical times, as well as to enhance neonatal intensive care unit services and improve the short- and long-term outcomes for local preterm babies and their families. 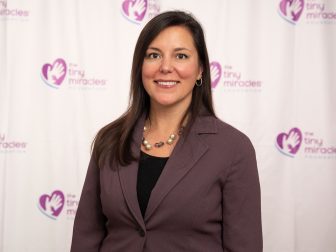 Photo from The Tiny Miracles Foundation

Tina Tison, new executive director of The Tiny Miracles Foundation, based in Darien

A Background in Marketing and Tourism

At The Maritime Aquarium, Tison guided the marketing and communication efforts of Connecticut’s second-largest family attraction.

Under her direction, the Aquarium achieved strong attendance over all five years, gained significant local and national press exposure, introduced a dynamic new website, and created a “virtual aquarium” that kept families engaged with the Aquarium while it was closed in 2020 due to COVID-19.

Tison has also served on several state boards related to tourism: then Gov.-Elect Lamont’s Arts, Culture and Tourism Transition Policy Committee; the Speaker of the House of Representatives’ Blue Ribbon Panel on Tourism; and the executive committee of the Connecticut Tourism Coalition.

She was appointed by State Senate Majority Leader Bob Duff to serve on the CT Tourism Council and will remain on that board. For her work beyond her role at the aquarium, she was named Connecticut Tourism’s 2019 volunteer of the year.

Tison also is on the Board of Visitors at the Welch College of Business and Technology at Sacred Heart University, where she is the chair of the Marketing Committee.

Beyond Connecticut, she served on the marketing committee of the Association of Zoos & Aquariums (AZA), the national accrediting organization that sets the highest standards for animal care and guest safety.

Prior to The Maritime Aquarium, Tison worked for the Norwalk-based ad agency Media Storm, where she served as a managing director for 10 years. She was the senior executive on top brands including FX, Food Network and ABC Family, and led integrated consumer marketing efforts that broke network and industry records for ratings.

Previously, Tison held VP titles at both Grey Worldwide and Young & Rubicam in New York. Her work was recognized with multiple Effie Awards for advertising effectiveness.

The graduate of Washington and Lee University lives in Fairfield with her husband, Joe, and their two children.

Tison comes in to The Tiny Miracles Foundation just as the organization holds its annual fundraising gala on Wednesday, Nov. 17 (World Prematurity Day), a virtual evening event titled “Miracle Moments.” You can learn more about the gala, including registration, here.

You can learn more about The Tiny Miracles Foundation or become involved — including supporting the Nov. 17 fundraiser — by calling (203) 202-9714 or go online.