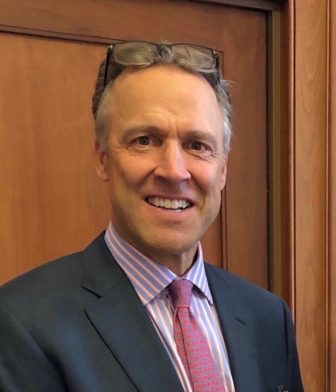 Mark von Kreuter, 58, passed away Sept. 7. A memorial service is expected in the spring or summer of 2021.

He was a beloved son, brother, brother-in-law, uncle, godfather, and friend to all who had the privilege of knowing him.

Mark was born in Darien on Feb. 11, 1962. He was the son of the late Alan John von Kreuter (deceased 1991) and his beloved mother Barbara Jean Arnold von Kreuter Adams.

Mark was heavily recruited by numerous Ivy League colleges and attended Princeton University, graduating in 1985, where he majored in history, was a member of the University Cottage Club and was an outstanding defensive end for the Princeton Tigers.

Mark developed many long-lasting friendships during his time at Princeton. He later received his MBA from the Stern School of Business at New York University.

He had a very successful career as an institutional equity salesman, starting his career in New York at Smith Barney. Recently, Mark was a partner at Capture Capital LLC where he worked raising institutional capital for a variety of hedge funds and private equity funds. He was hardworking and made many friends along his career path.

He was a member of the Racquet & Tennis Club on Park Avenue in New York City, the Noroton Yacht Club and Wee Burn Country Club.

Mark was an avid skier, golfer and enjoyed fishing on Long Island Sound. His travels took him to Europe, Asia and Africa where he met with his many friends and enjoyed life to the fullest.

Mark is survived by his mother Barbara, his brother James and his sisters Betsy and Anne. In addition, he is survived by ten nieces and nephews to whom he was devoted: Christian and Hannah von Kreuter (James); Cristina, Rebeca, Alan, Marina and Diana Felix (Betsy and Juan Felix) and Samantha, Nicholas and Isabella Johnston (Anne). Mark was preceded into heaven by his godson Nils Dean Berggren.

A memorial service to celebrate Mark’s life will be scheduled for Spring/Summer of 2021.

In lieu of flowers, Mark’s wish would be to make a donation to the Nils Berggren GVHD Prevention and Treatment Endowment Fund at the Fred Hutchinson Cancer Research Center online or via wire or check by calling Jackie Montstream at (800)279-1618.