The 34-year-old seal knows how to hold her nose against the hand of her Aquarium trainers, and also against a “target pole,” the exhibit window and other objects. 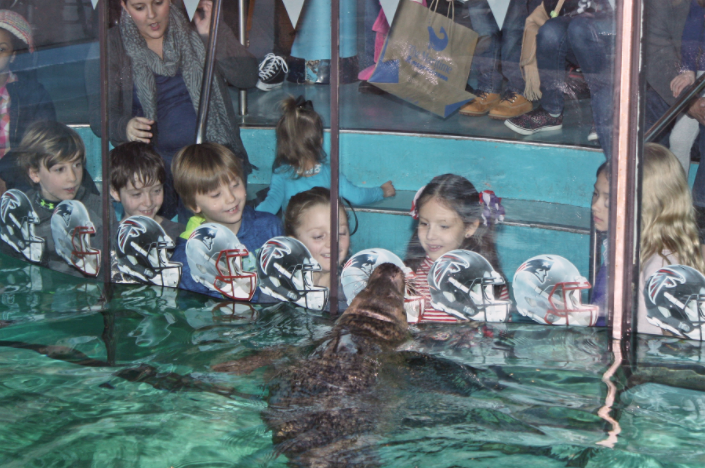 The aquarium’s harbor seals have been picking the wrong winner since these children were in diapers. But, what the heck, bet the rent money on it. You can always sleep under a bridge.

On Wednesday, Feb. 1, the Aquarium seal exhibit was lined with images of the Patriots’ and Atlanta Falcons’ helmets. When instructed to go to the exhibit window, Orange decisively swam to — and held her nose against — a Patriots’ helmet, indicating her pick.

If it’s any consolation for Atlanta fans, the Aquarium’s seals have proven to be pathetic pinniped pigskin prognosticators: they’re 0 for 5 in previous attempts to pick the Super Bowl winner.

Orange is one of six harbor seals at The Maritime Aquarium. Their public feedings are offered at 11:45 a.m. and 1:45 and 3:45 p.m. daily. Wednesday’s Super Bowl selection was actually a fun variation on a daily animal-husbandry demonstration.