The Maritime Aquarium at Norwalk and 23 other leading U.S. aquariums, as members of the Aquarium Conservation Partnership (ACP) , on Friday announced the first steps in achieving their long-term goal of carbon neutrality.

Fittingly on Earth Day, the aquariums are pledging to evaluate and reduce their greenhouse gas emissions, a major cause of a warming planet and global climate change.

“We have no choice but to undertake fast and drastic action on a global scale to reduce CO2 emissions into the atmosphere if we want to enjoy the planet as we have known it for thousands of years,,” said Jason Patlis, president and CEO of The Maritime Aquarium, “and it is the responsibility of The Maritime Aquarium, as one of the foremost aquariums in the nation, to lead by example and join the nation’s other top aquariums in committing to a path that will lead us to a carbon neutral future.”

Within a year, with a long-term goal of achieving climate neutrality, the 24 aquariums will assess the amount of CO2 emissions that their operations create, either directly from on-site, owned sources, or indirectly from – for example – the electricity, heating or cooling that they purchase.

By April 2024, the aquariums will develop individual emissions-reduction plans, with timelines for completion.

Rows of solar panels installed on the roof of The Maritime Aquarium at Norwalk in 2016 help to reduce the Aquarium’s reliance on CO2-emitting sources of electricity.

In addition, the aquariums will share strategies for achieving carbon neutrality with each other and with the public, while supporting strong, nature-based solutions in international, federal and state climate-change policies.

In addition, next week Dr. Sarah Crosby fills the newly created position of director of conservation and policy to significantly expand the Aquarium’s leadership role in local and national conservation issues. And, Patlis added, the Aquarium is incorporating information about climate change — and what we all can do to counter it — in exhibits and educational programs.

Climate change is the greatest threat to the future of our planet, our ocean and freshwater systems, and people. For decades, the global ocean has been taking the heat for climate change, absorbing more than 90 percent of the excess heat and nearly a third of the carbon dioxide generated by greenhouse gas emissions.

According to the most recent Intergovernmental Panel on Climate Change report, while the rate of emissions growth has slowed, in 2010-2019, average annual global greenhouse gas emissions were at their highest levels in human history. Without immediate and deep emissions reductions across all sectors, limiting global warming to 1.5°C is beyond reach.

Locally, warmer temperatures of Long Island Sound have contributed to shifting fish and crustacean populations, with warm-water species (such as scup and summer flounder) flourishing but cold-water species (like lobsters and winter flounder) disappearing.

Rising water levels have contributed to increased flood damage during storms. And CO2 released into the atmosphere is absorbed by the ocean, which can lead to ocean acidification and its detrimental impact on a variety of marine life. 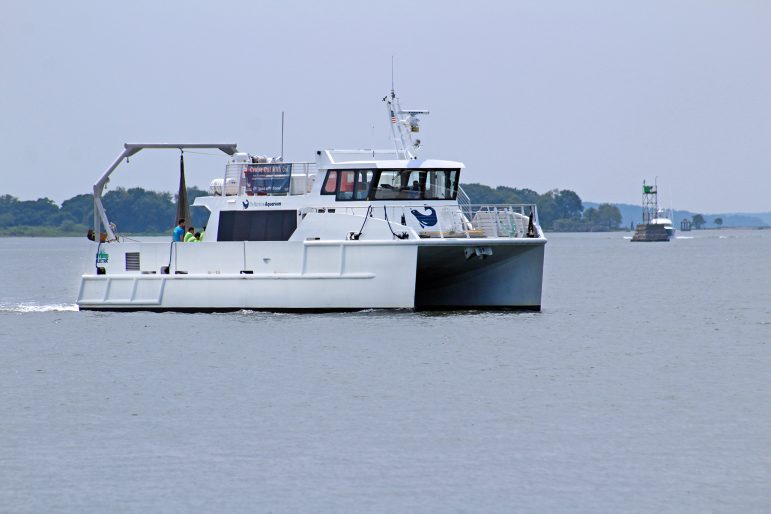 The Maritime Aquarium at Norwalk’s research vessel, R/V Spirit of the Sound, was the country’s first hybrid-electric research vessel. Launched in 2015, the 64-foot catamaran replaced a diesel-powered trawler.

The aquariums’ ongoing commitment to expanding sustainable practices has already collectively eliminated over 1 million single-use plastic bottles from landfills since 2018.

“As leaders in conservation, aquariums are expected to walk their talk, and that’s exactly what this partnership is meant to do,” said Kim McIntyre, Executive Director of the Aquarium Conservation Partnership.

“We are uniquely qualified to set an example for others — in reducing our carbon footprint, encouraging sustainable operating practices, and inspiring hope in a public that is hungry to be part of the solution.”

You can learn more about The Maritime Aquarium’s conservation work here.