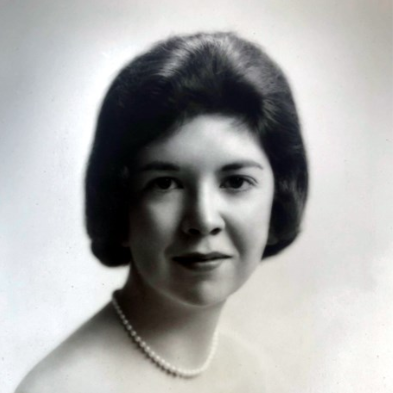 Margaret Mathews, 83, passed away on Dec. 6. Funeral arrangements have not been announced.

Margaret (Peggy) Mathews passed away of natural causes at her home in Cumberland Foreside, Maine on Dec. 6, 2018 at the age of 83.

Peggy attended the Miss Porters High School in Farmington and graduated from Smith College in Northhampton, Massachusetts in 1957 with a degree in art history. Peggy married Robert (Bob) Mathews in Darien in 1958 and moved to Wiesbaden, Germany and Stockholm, Sweden.

Returning to the U.S. in 1960, following the birth of their daughter, Melissa, Peggy and Bob spent the next 12 years in Winchester and Lincoln, Massachusetts, while Peggy raised their three children and was an active artist in the community.

Peggy, with kids in-tow, greatly enjoyed visiting her mom, Margo, in Martha’s Vineyard throughout the 70s and early 80s. During this time they purchased land and built a home in West Cundy’s Harbor, Maine.

— an obituary from the Lindquist Funeral Home

In 1972 they moved to Brunswick, Maine and bought the Harriet Beecher Stowe House Inn and Restaurant, which they ran as innkeepers until retirement in 1999. During her years at the Stowe House, Peggy ran the restaurant, bar, motel, and gift shop in the business.

Peggy became an avid needle-pointer, quilter, painter and photographer. Peggy sold her needlework and quilts all over the country and was one of the early adopters of eBay, founding the online store, “Down-East Quilts.” Peggy was an avid quilter well into her 80s. Peggy was a dog lover having multiple standard poodles and German shepherds.

Peggy is survived by her eldest daughter, Melissa Cott, of Cumberland; and her two sons: Bob and Charlie Cott; her middle son, Peter Mathews of Los Altos Hills, California and his wife, Cheryl, and daughters, Whitney and Haley; her youngest son, Rob Mathews, of Portola Valley, California and his wife, Gretchen, and son, Drew, and daughter Megan; and last but not least, her dog Rudi.