UPDATE AT BOTTOM OF ARTICLE:

An announcement from Darien police at 12:56 p.m., Friday:

On July 7, Michael Hudson, age 26, of 73 Ferris Ave., Norwalk, was arrested by this agency for his involvement in the sale of heroin to undercover officers. 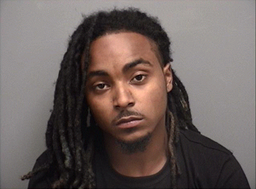 Darien police arrest photo of Michael Johnson, 26, of 73 Ferris Ave., Norwalk, on charges of possession and sale of narcotics.

Several months ago, police learned that Michael Hudson was selling heroin in Darien and Norwalk.  The Norwalk Police Special Services Division determined that Hudson based most of his heroin dealing in and about the Colonial Village housing community [located just north of Best Buy] in Norwalk.

During the investigation, undercover officers were able to purchase heroin from Hudson and on one occasion a bag of heroin purchased from Hudson was laced with Fentanyl.

Following a lengthy investigation by both departments, the Darien Police Selective Enforcement Unit secured an arrest warrant for Hudson for the possession of and sale of Heroin.

On Thursday afternoon, Norwalk officers observed Hudson exiting an apartment in Colonial Village.  As he drove away on a scooter, he attempted to elude police engaging them in pursuit.

After attempting to flee by driving on the grass, Hudson fled into a West Cedar Street apartment.  Norwalk officers subsequently apprehended him as he attempted to exit the rear door of the apartment.

At the time of Hudson’s arrest, officers recovered a bundle of heroin — 10 bags — and a loaded 9mm handgun.  Norwalk Police Department’s Special Services Division is currently investigating the origin and possession of the handgun.

He was charged by Norwalk Police with Possession of a Controlled Substance, Possession of Narcotics, Possession with Intent to Sell and Interfering With An Officer for Thursday’s incident.  He was then turned over to the Darien Police Department for the outstanding arrest warrant.

Hudson is scheduled to appear in Stamford Superior Court on July 18, 2016 for the Darien charges where he will face 3 Counts of Possession of Narcotics and 3 Counts of Sale of Narcotics.

Update: Norwalk police said Hudson was held on a total of $150,000 in bonds — set at $50,000 each in three arrest warrants. Norwalk police also have a different arrest photo of Hudson: